Save
Villa in Messinia / MGXM Architects 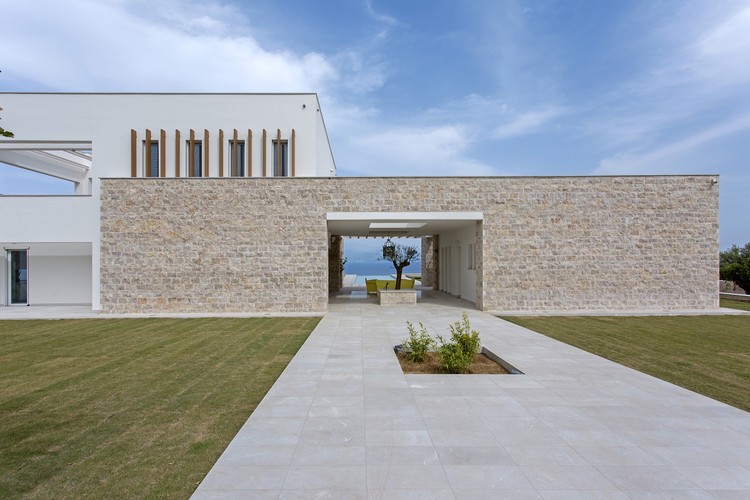 Text description provided by the architects. The residence is situated on a foothill in small distance from the coast on the west side of the Messinian Gulf.

The building comprises of two volumes which are linked via a patio which functions as a living area during the summer. The long length swimming pool is situated in a continuation of this space. The building is laid out in such a way that upon entering, the user is presented with a frame of the infinity pool, a strip of sea and the pyramid of Taygetus Mountain beyond.

This harmonious sequence is also highlighted by an according use of materials. The same marble has paved the "square" before the entrance and the patio, then surrounds the pool ending to a waterfall at its end towards the sea.

Respectively, natural materials of Peloponnese were used for the building such as marble and stone, while supreme white dominates the walls, reflecting the lights and highlighting the juxtaposition of the materials.

The main residence comprises of two storeys with the living areas at ground level and a comfortable bedroom on the first floor. Large openings on both levels maintain a sensation of open space throughout the residence's interior.

On the first floor, the master bedroom's en suite bathroom resembles a wooden cube placed centrally in the bedroom with part of it visible along the ascending staircase.

One of the most significant expectation of the clients was the use of natural local materials. Argolis Marble (Lygourio Dark from the Quarry of Marmyk Iliopoulos) is chosen to become the main material of the building as it is used widely in the project, from stone blocks at the facade until little tiles in the bathroom walls. Big scale marble tiles are used to cover the floors in a polished or a matte or a grip finish according to each area. The same marble is also used inside the house in bigger scale at the living areas and small tiles inside the bathrooms. In order to highlight the building's main axis the same marble has paved the "square" before the entrance and the patio, then enters and surrounds the pool ending to a waterfall at its end towards the sea. 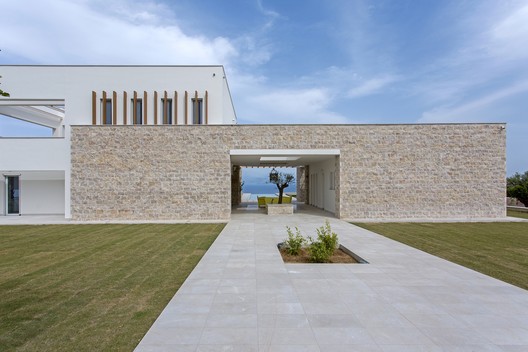