This special edition of a+u is a comprehensive issue dedicated to Sigurd Lewerentz's drawing collection, originally published as two issues in January and February 2016. Comprised of Lewerentz's hand drawings from the Swedish Centre for Architecture and Design (ArkDes) archive and photographs, the issue covers four of the architect's prominent works throughout his career: Malmö Eastern Cemetery, Social Security Institute, Villa Edstrand, and St. Petri Church in Klippan.

Essay: The discovery of built essence as the real act of invention / Wilfried Wang 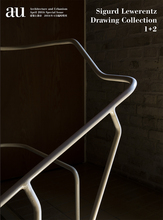