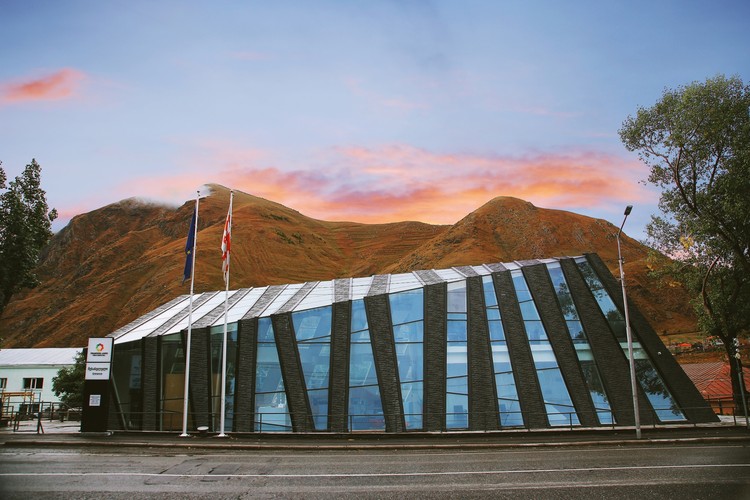 Text description provided by the architects. Public service Hall is located in Stepantsminda, North of Georgia, in high mountains near the Russian border, 1750 meters above the sea level, near alpine zone. The building is located next to the main road that connects Georgian military road and Tbilisi to Darial Gorge that is next to Russian border. This road also crosses Georgia from South to North (on both sides the roads end in high mountains), and connects Turkish and Armenian borders to Russian border crossing point. This road is often used for lorries and tourists who crosses the country. Stepantsminda is about 20 kilometers far from Georgian main ski resort Gudauri, Stepantsminda is a center of mountaineering and mount climbing. The town also has many visitors such as snowboarders, alpinists. The surrounding places are often used for skydiving, so the town has many foreign or Georgian visitors at any time of the year. Despite the small area of the building, its role and visibility is very important in this place. Another main factor is the location of the building near the mountain, where Gergeti Trinity church, one of the most beautiful and visited place and building in Georgia, is situated.

Georgian Public Service Halls in different cities of Georgia have their individual and distinctive architecture. In most cases these buildings are new modern face of the towns next to old historical buildings by which Georgia is rich. The main decision when creating building design was to connect modern shapes with traditional materials as well as creating organic shape for wild nature and landscape. Thus we were trying to combine good traditions of vernacular, modern and organic architecture.

The Building shape is deformed and deconstructive, but never uses oval forms, that matches to the look of the mountains located nearby. The mountains are faceted, dark and cold, often covered by white snowy stripes that is shown by glassed and stoned deformed stripes in this architectural way, building partially meets the outline of the neighboring mountains and looks like a piece of it, while it is not lost in the current environment and has a distinctive feature of the dominant building, that is organic in this harsh background.

The main design details are these dark and glazed stripes, as well as deformed shape of the building that has no straight walls. All of these walls are angled to different directions. All of the wall stripes are covered by grey stone shaped concrete that is the main material for the traditional architecture. The glassed stripes begin from the ground level, crossing the building main façade wall, the slopes of the roof  end to another zero level. So they cross almost the whole building.

Even the main interior decoration consists of these stripes. In the interior, Public Service Hall standard design of furniture and lights are shown, but the main decoration is the same as it is on façade. Also, there is a wedding hall for legal marriage registration. The wedding hall design corresponds to the façade forms and design.

The architectural solution used for the building is a deformed volume that matches mountain shapes to glass and stone shaped concrete parts. The reason for choosing the above solution is that the building is surrounded by Glaciers, mountains and ancient churches with some traditional buildings, as well as some new ones from Georgian latest history – Soviet Union era buildings that has no architectural value. The Georgian churches were made ordinary from processed stone while the local mountain residential houses were made of local rough stones. Traditionally they were about 80 cm or 1 meter wide and built without any adhesive materials -just dry stones. The traditional local buildings were mostly made by dry stones with the same look and same grey color, as building design has. The dry stone was not possible to use as building main material as It had bearing wall function, so it was combined with modern material, concrete with the same stone shape that provides a modern look of the building but matches to the traditional material look of the nearby buildings. Due to the fact that Stepantsminda is located near to alpine zone, the mountains surrounding the town are mostly shown without any forests or trees. The main background mountains of Stepantsminda look the same. They consist of grey stones that continue to green grasses of alpine zone. The building with this shape and stone looks organic in surrounding mountains and buildings and can be considered as mountain pieces. Another main material used in the design is glass providing solar lights into the building and electrical lights out of the building at night. The surrounding mountains are covered by snow almost during the whole year. From spring to autumn they are partly covered, partly the landscape is seen and mountain stones are visible. At daytime the glass part of the building provides an organic look of the building in the snowy mountains, while at night the building looks like monument of the same idea. 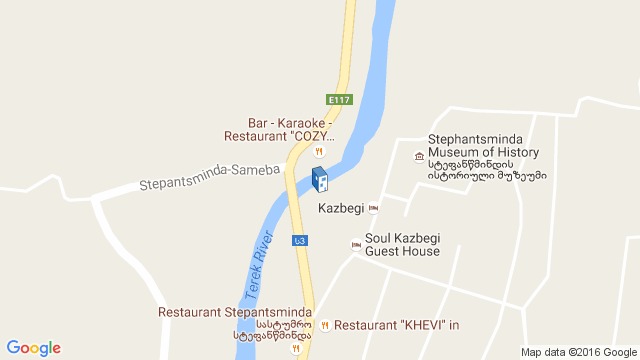