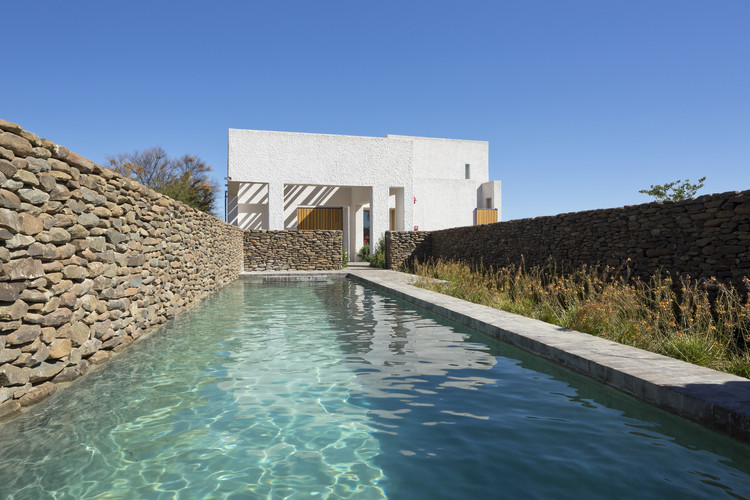 Text description provided by the architects. This passive solar new-build house on the edge of the Great Karoo desert in South Africa acts as a poetic and flexible agricultural object. Located on the outskirts of the town of Prince Albert, at the foot of the Swartberg Pass, a World Heritage site, the shifted geometries of the plan are a consequence of arranging the spaces in response to the surrounding landscape.

A harvester of light and air, adjusted by its inhabitants in response to the changing natural elements. The brief demanded that the house bring the inhabitants into a closer relationship with the natural world. Enhancing their awareness of the spectacular natural landscape of the Swartberg and the Karoo. With significant changes in light, heat and wind, at different times of day and during different seasons; a ‘fabric first’ approach was adopted to the design and planning of the house; a focus on passive, rather than an active means to heat and cool the building.

The house was built by local builders with a minimal cost of less than £200,000. It uses a limited palette of robust materials, which connect to the previous use of the site as a sheep farm – brick-on-edge floors, ash, local roughcast lime-washed plaster and white ceramic tiles. Utilising local labour and materials connect the home with the traditional building style in the Karoo.

The patterned brick-on-edge floors and roughcast plaster walls and ceilings are kept consistent throughout the exterior and interior spaces, allowing for an ambiguity between inside and out. They are deliberately non-domestic and unrefined. The finely detailed joinery, made in oiled ash, acts as a counterbalance to the more robust materials and differentiates between the sculptural qualities of the solid structure and the elements made to be touched and used in everyday life.

With the intense heat of summer the thick-walled house can be shuttered, while in winter the large openings act as sun catchers, allowing the dark brick floors to radiate the stored warmth of the sun in cool evenings.

The day/night, light/dark character of the house is emphasized by large glazed doors, which slide away into roughcast plaster walls, and small scattered openings allow shafts of light to penetrate into shadows, cleverly configured according to the positions of stars in constellations visible from the upper roof terraces.

The large elevated roof terraces act as a modulated raised ground surface. They allow far views of the mountains, and bring the inhabitants closer to the clear, star-filled skies. Openings and spaces are designed to bring near and far landscapes into the way in which the house is experienced, collapsing the distance between nature and everyday life. 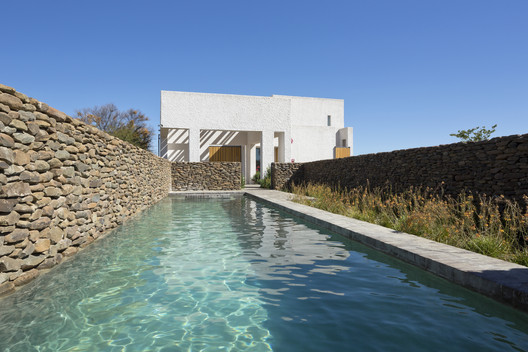