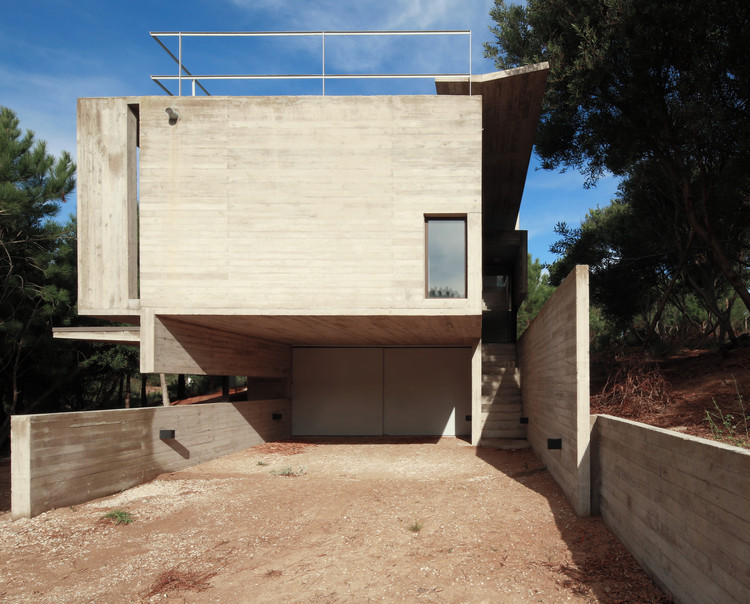 Text description provided by the architects. A plot of land sloping downward into the sea. A rugged atmosphere of native pines and acacias. The open sky and the see merging into the horizon. Such was the scenery from were Roland House’s project began.

Even though the commissioner’s program called for a typical summer house that satisfied the usual needs, it also had some peculiarities. Both social and private areas had to be organized on a single floor, except for a single independent space:  the main suite integrated with a room for working and reading, a bathroom, and its own exclusive terrace.

And that is how the house was built. Two bedrooms and an expansive yet unified living-dining-cooking area set on the ground floor while above, more independently, stands the master suite and the studio-library requested by the client.

A pure and solid exposed concrete prism, half buried into the sand dunes almost like a railway carriage abandoned in a desert, became a living artifact.

Floating above the street level, this volume produces a semi covered area that serves as a parking place. From this area, a two-story high narrow passage, fixed between to walls, directs towards the entrance, from where the space opens up into the house’s ample and luminous ground floor.

The facade at the front opens up to the surroundings. Rising from the natural terrain, the first floor protrudes the box and expands towards the outside. Encircled by the canopies of the pines and the acacias, it presents itself as a space for sensitive intimacy. Its terrace, however, surpasses the canopies and allows for views of the sea and the horizon.

The facade at the back, mostly blind, becomes the dune’s retaining wall where the volume penetrates the terrain, and lodges the service areas. At the same time, it hosts the vertical circulation that starts at the ground level and goes all the way up through the first floor drawing a single straight line.

The study of the proportions between the heights and the dimensions of the inner spaces, along with the decision to produce linear openings on the walls—thus avoiding full height windows—looked to emphasize the building’s horizontality and to lower the visual impact of the bar-like volume, in an attempt to achieve a respectful dialogue with the environment.

This spatiality inside allowed a centrifugal effect for the senses, directing the views through big glazed openings towards the outside into the natural surroundings. There was an attempt to conceive the house not as a complete object per se, but as a means to achieve enjoyment instead.

Most of the furniture was built in exposed concrete. The dining and the cooking areas are separated by a hanging partition, intersected by a horizontal pane that becomes a kitchen countertop and a dining table. While the partition gives the kitchen some privacy, the countertop and the table connect it with the living-dining area. These three elements were thought and built as a monolithic single object made out of concrete. This matter’s malleability allowed for it to be conceived as an autonomous piece, able to articulate the different spaces with its synthetic potentiality.

Passive solar control devices were used. On the one hand, the walls of the first floor fold when they reach the ceiling and become an overhanging that protects the inside from the effects of the sun. On the other, for the same reasons, the floor slab prolongs to float over the ground floor.

House Roland intended to reassure itself as an object in its own environment, to belong to the scenery as a part of it and, at the same time, to own it. It was our intention to make this work of architecture and Costa Esmeralda’s natural atmosphere to vibrate in harmony.