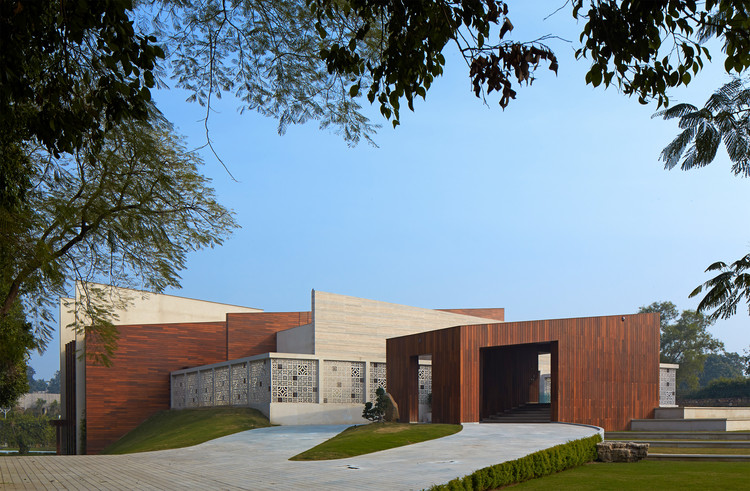 Text description provided by the architects. Through the Artisan House project, Morphogenesis looks to revive and re-establish a patronage for traditional Indian artisanal skills. India is symbolized by the diversity of its art and culture, yet with the changing paradigm there is a great need to conserve these symbols that are under a growing threat of neglect. Craft, emergent from skill and handed-down traditions is inherent in Indian culture, and is strongly representative of the global understanding of luxury today- that of the hand-made, bespoke, one that speaks of its provenance. Additionally, luxury in this project is expressed through the dexterity and beauty of spatial configurations, lending the space an experiential quality through the incorporation of craft, material, method and design.

The design exploits the terrain on which the project is located, to create two different levels that are instrumental in segregating functions. A large house intended to include a large extended family at times of celebration and festivity, the private spaces are placed in the earth-banked lower level, and the more public areas are designated to the upper level. In keeping with traditional Indian schema, the private living is organized around a central courtyard which contains a temple, imparting a spiritual omnipresence. A strong graphic language of striation is the organizing principle of the design, to retain scale within this very large volume. These bands translate into a series of vertical surfaces, with a different story unveiling in each volume subtended between two surfaces. What is unique about this house is that it’s hard to call anything a room when looking at the planning and philosophy behind the spaces. The house evokes luxury in its play with materiality and detail. There is stone craft in one zone, metal craft in another, textiles in the next. The strategy of banding allows for the use of distinct crafts and over 50 materials without impacting the architectural sensibility or destroying the cohesive narrative.

The striated planes notionally extend themselves beyond the edges of the built form, into the landscape and planting. So one could well be within a very stone crafted zone that extends out into a rock garden which then leads into another zone with a sculpture relief on the wall, with further leads into a water garden. There are multiple sequential exposures and experiences for the senses, so in a way there is also a luxury of experiences that this project affords. The experience created is akin to unfolding of space after space in a museum.

In nutshell, this project accommodates a traditional Indian family, traditional living principles and traditional craft and materials, but at the same time it was conceived as an extremely contemporary and modern house. This house represents luxury that is redefined: the luxury of handcraft, luxury in terms of freedom with experimentation which the client allowed, and finally, the luxury of different experiences.