Occupying a 5.2 hectare site, the complex contains 465,000 square meters of floor space, which includes a hotel, conference center, offices and underground parking, and is part of a larger masterplan by ZHA that will feature a pedestrian bridge linking the plaza with the other side of the river. 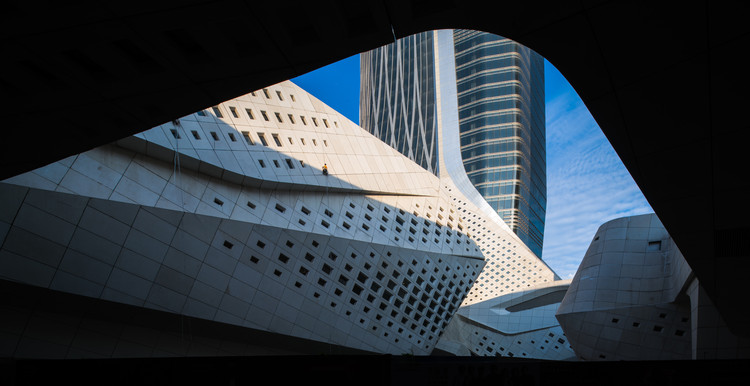 “The Culture and Conference Centre masterplan expresses the continuity, fluidity and connectivity between the urban environment of Hexi New Town, the agricultural farmland along the Yangtze river and the rural landscapes of Jiangxinzhou Island,” explain the architects.

The complex consists of two towers rising from a five-story, mixed-use podium. The taller of the towers rises 314 meters (68 floors) and contains a 5-star hotel and office floors, while the 255 meter, 59-story tower will house an additional hotel to accommodate visitors to the conference center below.

The Conference Centre contains a 2,100-seat conference hall, a 500-seat concert hall, a multifunction hall and a VIP area, expressed as individual volumes encircling a central courtyard on the ground level. At higher levels, the elements “merge into a singular whole” to allow pedestrian to traverse the building uninterrupted.

The complex is oriented on the site to create a gradual transition from “the vertical of the urban CBD to the horizontal topography of the river.” This transition is also expressed in the formal representation of the building: the fibre-concrete paneled podium borrows from the fluid language of the river, while the towers connect to the urban streetscape of the new CBD.

The project is slated for completion by the end of 2016.

See renderings for the project on ZHA's website, here. 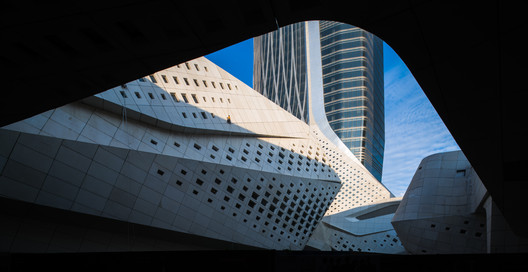