On Tuesday, September 6th, a groundbreaking ceremony was held for the newly planned “Berliner Block,” the Zalando Headquarters — a structure designed by HENN Architects for Europe’s largest online dealer in footwear and fashion. Along with David Schneider of Zalando Management Board and Berlin’s governing mayor Michael Muller, architect Gunter Henn spoke about the construction project currently underway.

In 2015, HENN Architects won the competition to design the Headquarters in Berlin. Their project will bring the entirety of the Zalando offices into a group of two buildings located on one city block. Hence, a Berliner Block.

While a typical Berlin block-edge development is horizontal or vertical, the Headquarters plan rotates the building grid diagonally to the plot. The outcome, in effect, allows for naturally illuminated workspaces and transitions between office and public space, linked by translucent facades.

Beyond the central “marketplace,” catwalks connect most of the areas, while an adaptable rooftop terrace can be used for a range of activities. The Headquarters, which are under construction now, are expected to open in Autumn of 2018. 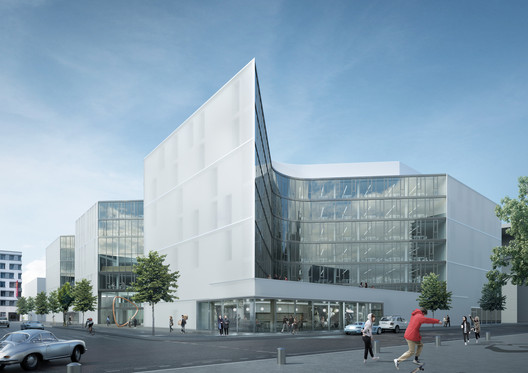