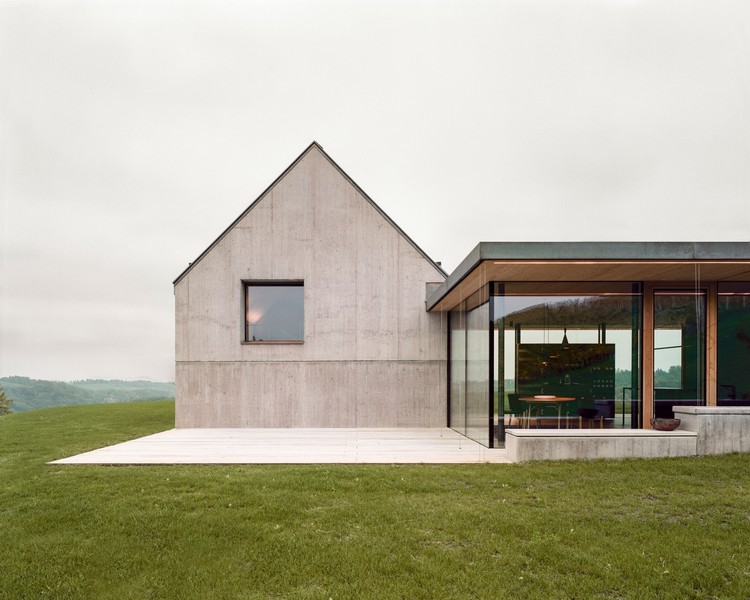 Text description provided by the architects. Embedded in the mellow, undulating landscape of Southern Styria sits Haus T, right on top of a hill, where it naturally blends in with the surrounding vineyards. Due to materiality and formal restraint, it forms a whole with the countryside as it stands confidently on the edge, gable facing the valley.

The small vintner’s house, which used to be the wine press house until early in the 20th century, served as starting point for the single-family detached home. The historical vaulted cellar is made of stone and more than 400 years old. Therefore, it is the oldest part of the house, which was remodelled in the 1960’s and had been uninhabited in the last few years. The building-owners, two winegrowers, decided to make the old vintner’s house their retirement home, as the nearby vineyard has been their professional and private centre of life for so many years now.

According to form and function, the new building is divided into two building structures: A rectangular cube with a pitched roof was built above the vaulted cellar – a homage to the former building, that stood in same alignment and similar cubature on the gently descending northern slope. The monolithic construction of coloured isolation concrete, the structure of the rough sawn wooden plank formwork as well as the sparse square openings provide the building with an introverted character. This is why the gallery as well as sleeping and wet areas are located inwardly as places of retreat. The brown colour tone and the haptic texture of the concrete walls convey comfort. Only well-chosen sections of the 360°-panorama are uncovered by several windows with broad wooden frames.

On the eastern side of the building lies an orthogonally adjoining, planar and elongated building structure, which incorporates the living room, the cooking and dining area, as well as a garage. This ceiling-high glazed part of the detached house with an overhanging flat roof made of displayed solid timber, enables the surrounding scenery to diffuse into the building. This way, there is no apparent dividing line between inside and outside, so that nature and building seamlessly merge into one another.

When entering the house through the northern entrance, one looks straight through the anteroom into the living room, that can be separated from the cooking and dining area with a piece of furniture and can furthermore be used as guestroom. A service zone with a small bathroom, lavatory and storage room divide the living quarters from the garage. All interior walls are designed as furniture walls made out of darkened ash wood and comprise wardrobe, kitchen, shelves and sliding doors. Thus, the entire living area can either be viewed as one room or it can be separated into two sections by the furniture walls.

Via the open kitchen and the dining area one reaches the intersection of the two building structures. A split level leads to the old wine cellar and the installations room or upstairs to the gallery. The smooth transition from kitchen to living area and gallery is separated from the bedroom by the bathroom and a walk-in closet, both of which have been set up as boxes in the gable space.

The simple materiality of the interior is congruent with the exterior appearance of the building. Apart from fair-faced concrete and timber, individual elements like the gentle pillars and the banisters are made of black steel. The flush-mounted windows inside of the wall, the plank flooring and the staircase are crafted out of oak wood. Roof, windowsills and garage door are made of copper, that changes its brownish grey colour over time and either creates a contrast to or a homogenous scene with the surrounding landscape depending on the season. 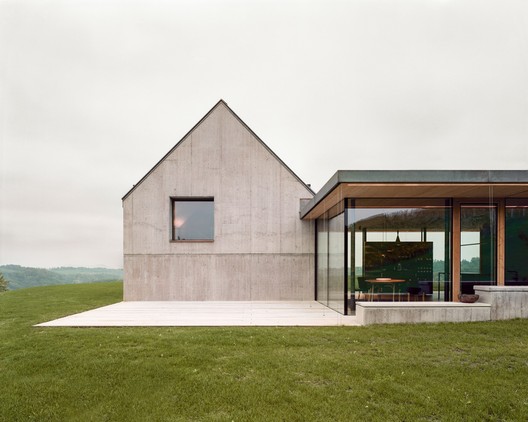