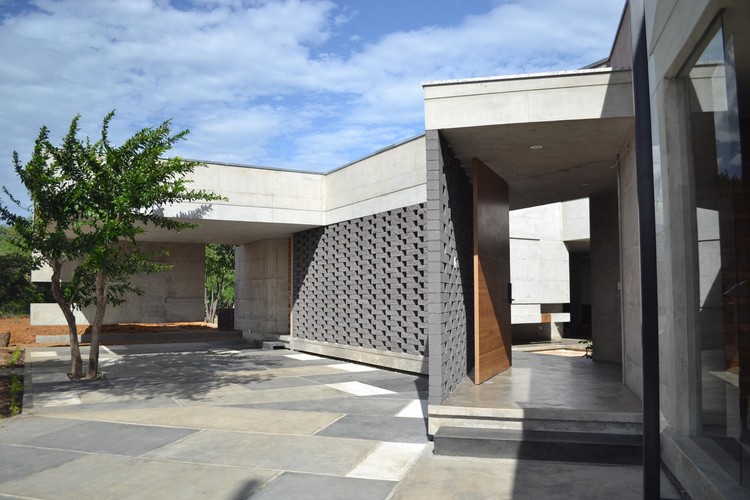 Text description provided by the architects. An order is received and according to the evaluation of the initiative it offers limited financial benefits, but simultaneously has excellent conditions to start a creative process, represented in a bet that assumes the premise: "the possibility of generating a project that is a CREATION and not a replica of something already imagined."

The proposal comes as a result of the relationships and conflicts between three basic components: the natural, anthropic and metaphorical; each component is approached from a key variable for its morphological interpretation (formal – spatial):

In this way the dialogic triad is obtained: LAND - PLANT – ROOF Addressing the analysis of joints and contradictions present and possibles between these three components, leads to find a complex interlocutor to establish simple relationships (above - below, outside - inside and solid - transparency, among others), from the previous  EXPLORATIONS made about THE GRID, allow assuming the project as a testing laboratory of concepts and relationships.

Taking lessons: “Para no contradecir la realidad, el arquitecto debería atenerse a los hechos arquitectónicos que a partir de ella se puedan formular” (Pérez, Aravena y Quintanilla, 2007:15). Based on this reflection it asks for an assessment of reality in search of the purposes to which must answer the triad. FIRST: Addressing the pedestrian and vehicular accessibility in relation to the adjacent street to 45°. SECOND: To form a permeable frontal plane to the breezes coming down from the Venezuelan Andes to clean the warm meadows and the reed fields. THIRD: Floating  perpendicularly  the parking integrating to the house exoskeleton, as opposed to the prevailing separate proposal. FOURTH: Structuring the central yard of 6 * 6 meters, which serves as a flow collector in both directions. FIFTH: An opening of 12.00 meters that allows integrating kitchen - bar - dining room – living room in a unit space conditioned for the furniture. SIXTH: Solving generic variables as:

Three grids that cross each other, the first one forming the LAND as a stepped floor, situating the house in downward cascade, allowing expand the section from the entrace to the interior; the next one forms the PLANT,  a sequence of horizontal planes sized in relation to the housing program, working to compression and supporting the ROOF falling from above in a grid of inverted beams.

A set consisting of roof - study - patio - parking - hangs from above by subjecting the inverted beams working simultaneously as hanging beams, two groups of load-bearing planes that fit with the program by way of partition walls, the first one groups rooms and the study on the northeast side integrating the intimate area of the house, while on the southwest side, kitchen, laundry area and guest bedroom, make up the structural corbel  what affixed to the floor gives balance to the imposing cantilever. On the floor, under an opening of 12 meters in a continuous space, the furniture is placed demarcating living room - dining room - bar, while the accordion unfolds delimiting the outside terrace facing the pool.

A exposed concrete skeleton defines the materiality of the house, which is subtly added three materials: MURO-CEL in black concrete redefines its use forming the permeable vertical plane in  a openwork way. Urapo and pardillo wood treated with natural wax bee impose their presence marking the space whit its horizontal grains, and the glass communicates that supports and  not that is supported, desmaterialize with multiple reflections.

The oblique beam receives breezes from the northeast and send them giving natural aceleration, toward the permeable frontal plane that as a filter allows its path and simultaneously controls solar radiation of the access corridor, while the horizontal planes float laterally supporting this strategy and minimize the east - west  sunlight.

On the southwest side as an accordion, urapo wood partitions allow the passage of the evening breezes and filter the afternoon sun giving a magical atmosphere of shadows and reflections. The system is complemented by a central yard formed by hanging beams that work as a flows collector and link the house with the outside.

…setting up the metals…

… “As family members that project-planning-in-the-making” (Smithson & Smithson, 2001:30)  We have learned from the master to put together things that Mies had; simple self-imposed rules show a clear intention to achieve the maximum benefit of a standard  shuttering; to join two planes requires dilate, the inability to use paints  and this way the "gray work"... is "white work". 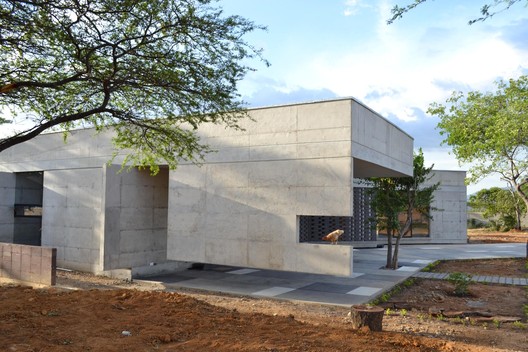 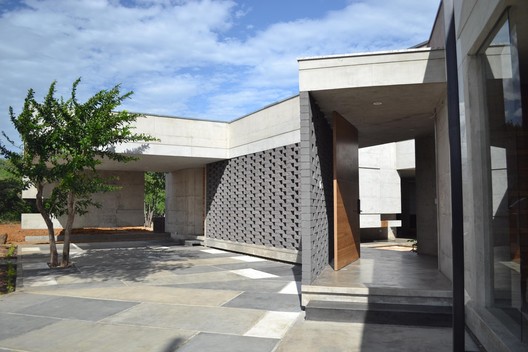