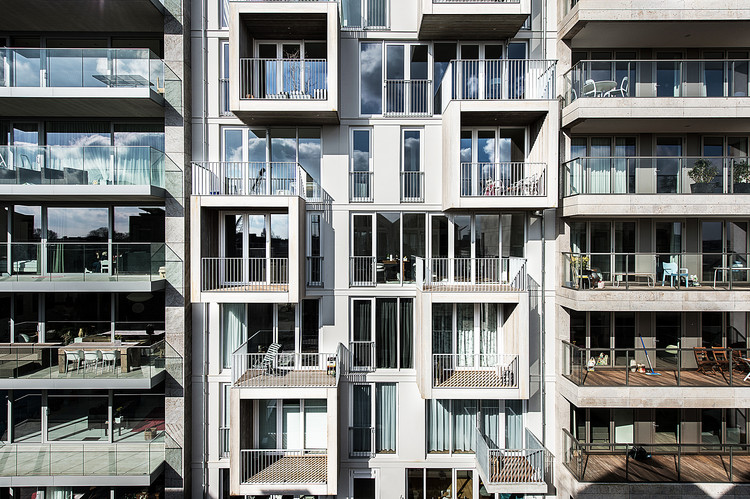 Text description provided by the architects. If you say Amsterdam, you say canals. Everyone knows the image of the canal houses, lined up side by side, each building with its own character. This streetscape is the result of private customers’ initiative, who had their building designed according to their own taste. In the Amsterdam Houthavens (literally Wood Ports), history is repeated. In the river IJ, seven artificial islands are being created which will offer space to groups of private buyers to design their own dream house at the waterfront. The result: a varied array of facades with eye-catching architecture. From a transshipment port, the Houthaven will morph into the hippest new neighbourhood of Amsterdam, offering space for locals and professionals alike.

The building ‘De Rede’, an initiative of Global Architects and Bot Bouw Initiatief, has been developed in Collective Private Commissioning (Collectief Particulier Opdrachtgeverschap, or CPO).

This form of development involves a group of private individuals who themselves retain control of the building process. It all starts with a vision: a group of people organize themselves around their idea of a dream home. Next, they will search for a location, an architect and, in many cases, involve a contractor to mitigate the (financial) risks. This way, CPO is also feasible for people without private funds. Together with this team, the residents will shape their own ideal building. They will determine --within the possibilities of the lot-- the price level, architecture, materialization, provisioning, and collective utilities of the building. Together with the architect, each of the participants will also design their own home. The architect is commissioned to convert all these wishes into a progressive design.

De Rede emerged from the desire of the group to build at the waterfront in an exciting new neighbourhood of Amsterdam, and from the wish for an affordable building with a luxurious appeal. Together with the residents, Arthur Nuss has designed a modern canal-side house in which each dwelling has its own character. The mixed programme, with apartments of 36m2 to 160m2, appeals to a wide variety of people. De Rede was delivered as a shell and completed by its residents according to their own taste.

De Rede consists of two different buildings that share a number of features: they are relatives. The larger building at the Haparandaweg and the ‘canal-side houses’ at the Houthavens are intimately linked. For the facades of the complex, a solution was sought that ensured both the unity of the building and left room for the private interpretation of each resident. The facade panels, balconies, and conservatories are different for each house, which allows the building to retain its dynamic character within a collective design. The old-time feel of the canal houses is most palpable at the side of Houthavens. The larger building behind it is more minimalist and matches the desire for robust and modern living.

In order to emphasize the port area’s original character, the materials chosen have a raw look. Robust fencing, stucco, large glass panels and rough hardwood give the place an industrial feel.

De Rede is 100% carbon-neutral. A number of applications were instrumental in achieving this: on the roof, photovoltaic panels have been installed for the generation of solar energy. To reduce energy consumption, the houses are well insulated through the use of HR++ glass. The water from the river IJ is used for heat/cold storage so that, in combination with floor heating, little extra energy needs to be added.

These measures comply with the agreements made between the municipality and the developers to turn the Houthaven into a 100% carbon-neutral neighbourhood. Sustainable construction is key to the Houthaven and the entire energy requirement is generated in a sustainable way. 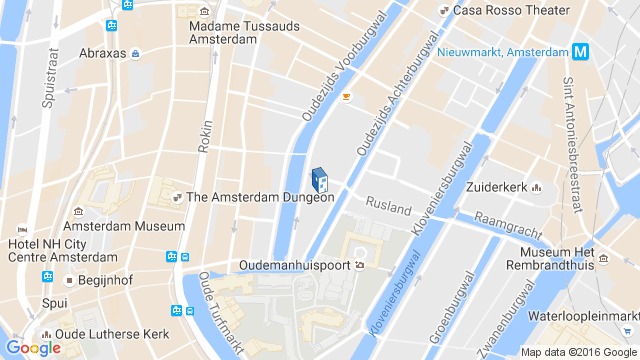 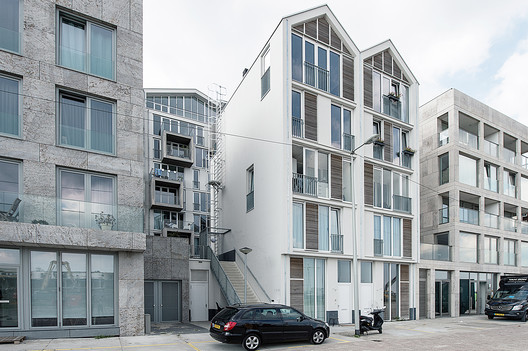 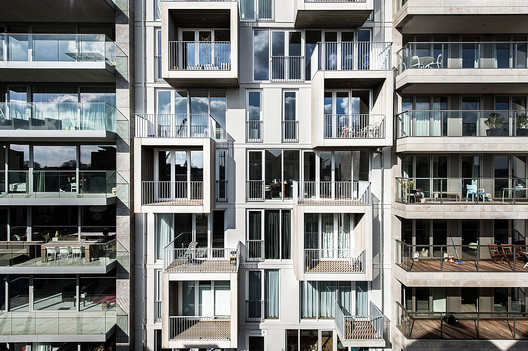