Construction is now underway on Skidmore, Owings & Merrill’s (SOM) OH-1 redevelopment project in the Ohtemachi District of Tokyo, Japan. Covering a 20,000 square meter (215,000 square foot) site, the project constitutes one of the largest revitalization projects in Tokyo’s history. The complex includes two high-rise, mixed-use buildings containing a luxury hotel, commercial office space, retail and cultural facilities, and is centered around a park and public area that will visually connect the development to the adjacent Imperial Palace East Gardens.

A product of their context and SOM’s design approach – “balancing tradition and innovation” – each of the project’s two towers takes on its own scale, massing and materiality. The 160 meter tall Tower A faces the Imperial Palace, and harmonizes with its historical context, employing techniques inspired by traditional Japanese craftsmanship in its granite and glass cladding.

Facing the Ohtemachi district, the 200 meter tall Tower B features a glass and steel skin as it rises from the city to “establish a strong presence on the skyline as an emblem of contemporary Japan.”

In total, the towers will contain a total floor area of  360,000 square meters. Included in that number is a flexible event space overlooking the park and plaza area that will be equipped host a range of events from musical performances to international conferences. Both towers have been designed with a range of sustainable features to reduce energy consumption.

On the western section of the site, the 6,000 square meter (64,500 square foot) park will feature a reflecting pool and plaza landscaped with native flora, as well as a new setting for the historic Masakado’s Shrine located on site. OH-1 will also provide direct access to several metro lines, ensuring its accessibility via the Tokyo public transportation system.

Once completed, OH-1 will serve as a new corporate headquarters for Mitsui & Co, one of the largest general trading companies in Japan. The project is the next in a line of collaborations between SOM and developer Mitsui Fudosan, who together have created a series of major developments throughout Tokyo totaling more than 2 million square meters.

“We are thrilled to partner once again with Mitsui Fudosan on this transformative project, which will revitalize Ohtemachi to become not only a world-class business center, but also the heart of a vibrant, 24-hour neighborhood,” said Mustafa Abadan, SOM Design Partner. “Our design bridges Tokyo’s past and future—honoring the historical and cultural signi cance of its site, and at the same time, signaling Japan’s stature at the forefront of technology and innovation.”

The project is scheduled for completion in 2020. 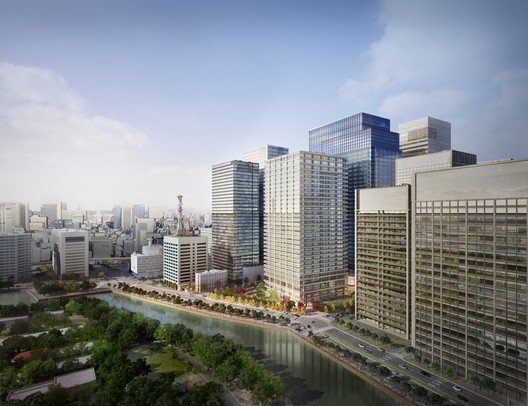