Save
The Rosenberg Golan and Ricky Home / SO Architecture 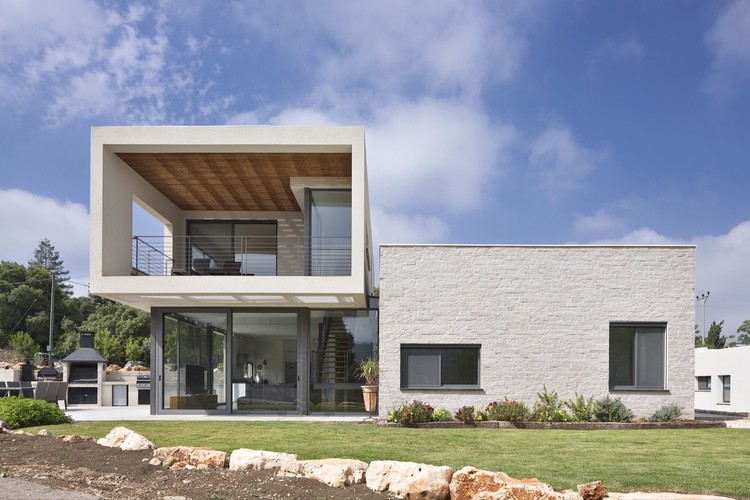 Text description provided by the architects. The Rosenberg Ricky & Golan home in Kibbutz Yehiam was designed in natural woodlands in a young residential neighborhood which is being built on the outskirts of town. The House was built on a sloping topography across the field..

The formal concept of the plan was the creation of two boxes located opposite to each other. One box is placed on the ground and the other raised in the air on a thin steel columns on one part and on the other part on a stone foundation. The floor of the ground floor is in unified level and the house is partly dugged into the mountain. The space created between the ground and the floating white box, is glazed and used in public areas of the house- kitchen, living room and dining area.

The volume built on the ground, covered with stone similar in color to the local stone. In this area are designed the children's bedrooms, safe room, and various service rooms. The dining area was located in a place that connect the small patio and the main space which includes the living room and kitchen. The outside area in the east side of the house, continues the public space that includes an outdoor kitchen, terraced seating area and a dining table. constant eye contact between inside and outside is maintained thanks to the use of wide glazing systems and installing hidden shading systems. The separation between the volumes and the insertion of natural light deep into the house, emphasizes the distinction between private and public and allow insertion of light deep into the house, which is wide in proportion.

Doubled and framed space escort the visitor which going up the steel stairs to the second floor while above glanced a piece of sky from the length Skylight window. The second floor overlooking the view and includes a wide master bedroom with an open porch, similar in size to the master bedroom , and above the porch a defined and enclosed pergola in roof prism. The terrace protected and allows privacy to the residents from their neighbours, while opening a framed and directed look to the far view of "Ein Yaakov". At the back of the master bedroom glazed shower with unrestricted bath tab installed on the background of exposed concrete boards . On this floor also a sewing studio of the owner , that works in fashion design.

Inside the house, length , width and opened views are created from the front door to the landscape, in the opposite direction from the patio, which is located in the covered in stone volume toward the outdoor kitchen.

The design allows constant invasion of the greenery and the view to the inside of the house, while maintaining privacy to the tenants from the neighbours in the neighbourhood. 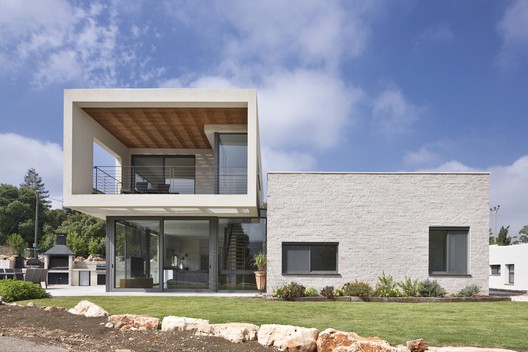