The Visual Resources Collection (VRC) at the Columbia University Graduate School of Architecture, Planning and Preservation (GSAPP) has released the second phase of their online database, now containing 20,000 images of architectural plans, sections, diagrams and photographs. The Avery/GSAPP Architectural Plans & Sections Collection contains images related to GSAPP’s history of modern architecture curriculum, which focuses on the history of modern buildings, with an emphasis of 20th century Modernism.

Released within the Artstor Digital Library, the collection was launched earlier this year with 10,000 images. Now, after the completion of Phase 2, the database includes images from nearly 1,000 built projects from 44 countries as well as documentation of unbuilt projects and competitions such as the Chicago Tribune Tower and the Lenin Library. The new set of 10,000 images also includes nearly 100 projects by architect Le Corbusier, 100 projects in South America, and over 125 in Japan.

The collection was compiled by three VRC curators in conjunction with professors Mary McLeod and Kenneth Frampton, as well as a team of over 25 Columbia GSAPP students. The team included students from across many of the GSAPP programs, including Masters of Architecture, Historic Preservation, Urban Design, and Urban Planning programs.

The Avery/GSAPP Architectural Plans & Sections Collection is available online for free for members of an extensive list of educational institutions, including the majority of architecture programs across the country and many programs worldwide.

Find out more about the collection, here. 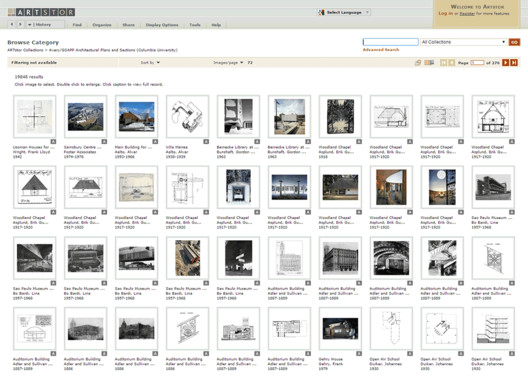