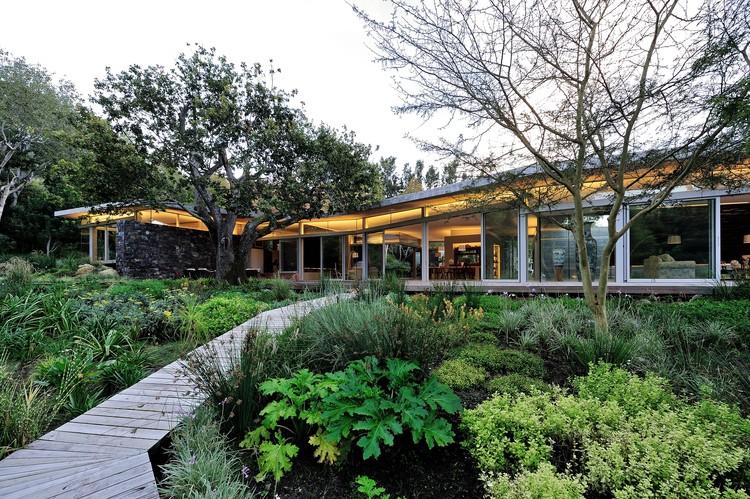 This new residence, located on a beautiful wooded riverside site in the Constantia Valley, attempts to establish a close relationship with a relatively unspoilt piece of the natural environment.

The site, subdivided off from a larger estate, and originally containing lawns and a tennis court, has a gentle fall to a beautiful stream to the south, which hosts a variety of birds and wildlife. It is entirely surrounded by tall well-established trees. As a result, despite being located on a relatively busy suburban road, the site is visually completely secluded, a ’clearing in the forest’, offering a unique set of opportunities for transparency and continuity with its surroundings.

In terms of NEMA legislation, the house was required to be set back 30m from the stream. The site between house and stream was rehabilitated: the tennis court and lawns were removed and replaced with an indigenous garden, accessed by elevated timber boardwalks and flowing continuously into the lush riverbank vegetation.

The clients, a couple with grown children, require a 3- bedroom, open plan house for themselves and occasional guests.

The brief focused on simplicity of lifestyle, ease of use, the pleasure of well-crafted natural materials and directness of experience of the natural surroundings.

The green wall of trees surrounding the site, were seen as the living perimeter of the house, with the roof expressed as a long continuous inclined plane falling with the slope of the site and forming an evocation of tree canopy, over a free-flowing ground plane. The single storey structure hugs the ground plane and is glazed extensively, to establish contact with the outdoors all round. The street edge is protected by a massive concrete wall, which is designed to reflect road noise from the living areas.

The house is arranged linearly, parallel to the river on the south and opening up to the sun along its entire length to the north. The living accommodation is positioned closer to Brommersvlei Road to the east, with the bedroom section on the interior of the site. The house pivots around a well-established oak tree, which deforms what could have been an idealized floor plan and establishes the idea of a resurgent nature as the primary element on the site.

The single storey structure hugs the ground plane and is glazed extensively, to establish contact with the outdoors all round. The street edge is protected by a massive concrete wall, which is designed to reflect road noise from the living areas.

A series of courtyards and patios, each offering a different experience of site and different degrees of sun exposure and wind protection at different times of the year, focus each grouping of accommodation.

The entrance court, a roughly square piazza- sized space, bounded by massive concrete and stone elements, is intended to establish an atmosphere of tranquility and silence as the prevalent mood of the house.

The kitchen and dining room open entirely onto a covered braai patio and the lounge is bounded by two courtyards, one planted and one containing a long natural pond.

The entire south façade has an extended timber patio, which forms an interface between interior floor-plane and garden.

Circulation is structured by two cross-axes, both of which start and terminate in the landscape and which are formed by long wall elements. 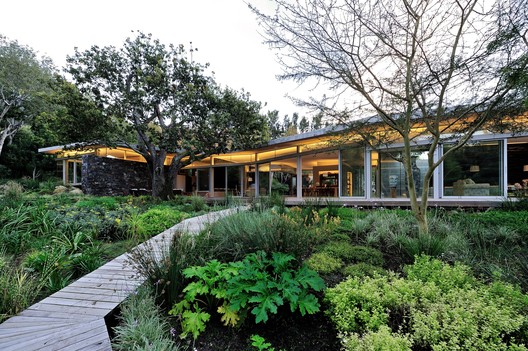