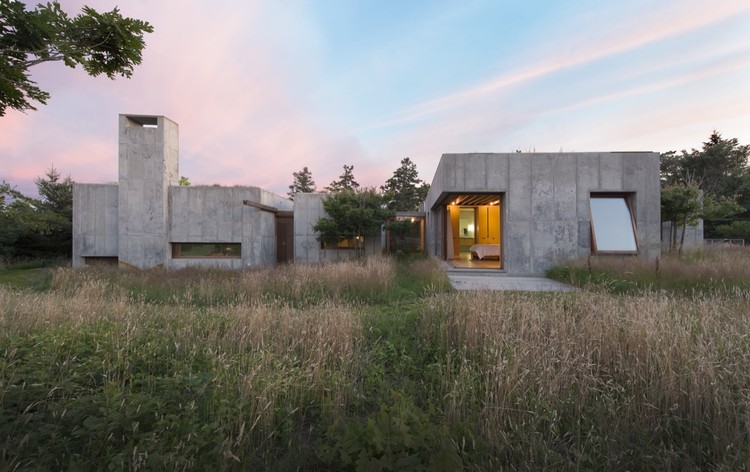 Text description provided by the architects. Nestled into the native shrubs of the Martha’s Vineyard coastline, East House’s site-cast concrete façade welcomes tendrils of coastal vines while providing a robust barrier to New England’s coastal weather. The ten-inch-thick concrete walls are cast in the form of a collection of concrete boxes, relieved with sustainably harvested Spanish Cedar window frames, and oriented to achieve both subtle and dramatic responses to the landscape.

During design, a commissioned study revealed a rate of coastal bluff erosion that made both client and architect extremely uncomfortable with the siting of the residence. The solution was to cast the floors – formerly wood-framed – in concrete, making each box a three or four-sided structural unit that could be individually lifted and moved to a location far from the bluff, should erosion occur. The 4,000 square foot house is thus divided into concrete boxes –  individually liftable with all interior finishes in place, and interstitial corridors – light wood framed zones that can be easily removed and rebuilt if the building is moved.

Each box has a rugged concrete exterior and is finished with interior stone floors. The interior walls are clad in Douglas Fir and Alaskan Cedar, which are soft to touch, but extremely durable in the rough coastal weather. Circulation travels along the interior figure of the boxes through interstitial spaces both rough-framed and finished in wood, and is choreographed to an ever-more-revealing experience of the site. Strategic through-views to surrounding greenery direct visitors from the entrance to a library and living area.

Embedded in the natural landscape, East House is nearly invisible from points further up the slope. The concrete shell is cantilevered over the landscape, allowing for expanses of glass along five walls. Operable windows pull back, and the gap between the concrete units amplifies the sound of the ocean, bringing it along with sea breezes through the entire house. A planted roof caps each box individually, mitigating run-off while further visually integrating the building with the lush landscape. Rainwater is collected in the interstitial roofs, directed to a single Mahogany flue, and cast into a below-ground cistern for use in irrigation. Geothermal wells use the earth’s thermo-conductivity to temper living spaces, vastly reducing the size and cost of HVAC equipment. With radiant heating, calibrated window openings, and the thermal mass of concrete, the house creates natural ventilation and buffers summer heat gain.