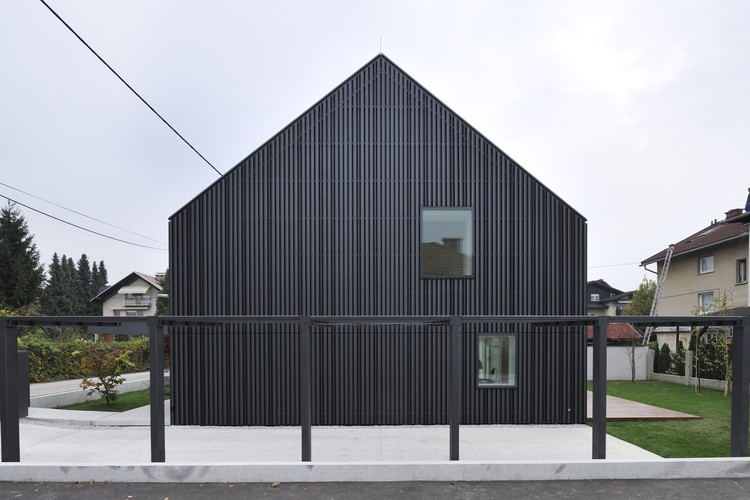 Text description provided by the architects. The project called for a small, one family house as a part of an existing semi-detached house, located in Ljubljana’s 1960s suburbia, in an area covered with a ‘blanket’ of small houses on minuscule plots of land.

The project became an exercise in organisational simplicity of the interior plan: on the ground floor, an insertion of a staircase slightly off-centre into the plan of the small living space effectively divides it into 4 distinct zones: access, kitchen, living/dining area and a workspace. The rooms exist and evolve around the column-like staircase in a simple sequence of different widths that defines them, simultaneously independent and fluidly connected.

Furthermore, a slight submersion of the ground floor surface by 30cm lower from the level of the garden, stresses the idea of ‘separation’ of the living space from the surroundings, creating a sense of intimacy with limited means at hand - this allows for both perpendicular walls of the ground floor to be opened along the entire length of the volume, while preserving the sense of ‘room’ for the interior.

On the upper floor, the staircase divides the attic space into 2 separate tent-like volumes - the parents and the kids room, which both overlook the neighbourhood through elongated, slit windows, lowered to the level of the beds.

The exterior of the house, in contrast to its older neighbour, is clad in black extruded aluminium profiling, reminding one of the black wood-clad buildings of the past. By turning the profiling inside out, a sense of precision of the project is achieved – the thinness of the profiling giving the whole building a sharp, monumental appearance.