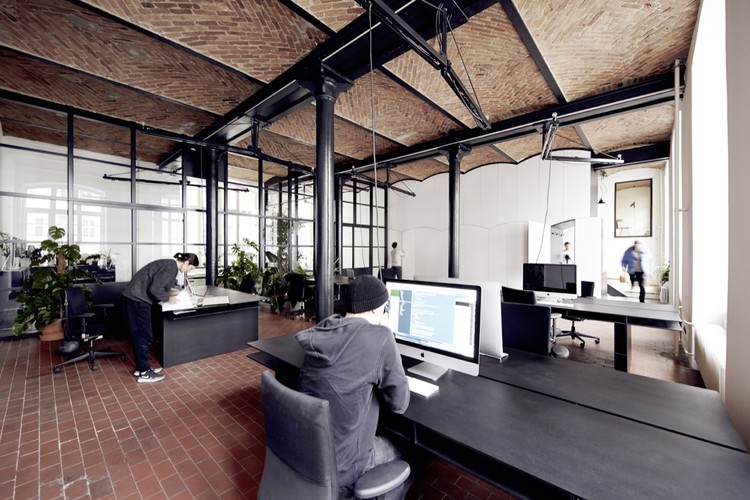 Text description provided by the architects. 2007 four friends from Bavaria (southern german state), sat together in germanys capital city Berlin. They decided to do something against their notorious shortage of fellow players in “Schafkopf“, a card game only popular in Bavaria. The simple solution was the website www.sauspiel.de that soon became extremely popular. Seven years later the team had already grown to 14 people, meaning that the old office was not big enough any more. For their new home, the Sauspiel GmbH made a find in the district of Neukölln, very close to the better known Kreuzberg, a lively area commonly referred to as „Kreuzkölln“. On sale there was the raised ground floor of the old chocolate factory, that was soon to become the new Sauspiel headquarters.

The task was not an easy one. An open office and a flat hierarchy were to be combined with the need for a lot of storage space and a separate little flat to host guests. Sanitation facilities and a little kitchen were also missing. An especially interesting problem to solve was the power and data supply of the new workplaces in a building, without destroying the wonderful original material for such profane reasons.

All considerations were driven by the wish to show and preserve the existing in it's original form. The removal of later additions and un-orderly structures was therefore the starting point for the spacial concept where the whole unit is reorganised only by adding two room-high installations.

The design of the new shows a strong connection to the existing and plays between the poles of old and new. Seen from outside the new installations integrate and subordinate to the old. Taking a closer look though, one discovers that the new, especially it ́s insides, offers some great surprises.

In the main office on the lower level, the installation is a wall-like built-in furniture that separates the working area from the anteroom. It holds not only storage and an open kitchenette, but hides also toilets and a secret second entrance in it's insides.

On the upper level (above the gateway through the building to the inner courtyard) the second installation shows itself more openly as a new element. The little „construction trailer“ contains another kitchen on the outside and a showerbath on the inside. This way the upper area can not only be used as a meeting and a lounge room but also as a little flat. With a separate entrance from the staircase, guests can be hosted here completely autonomous from the operating office. 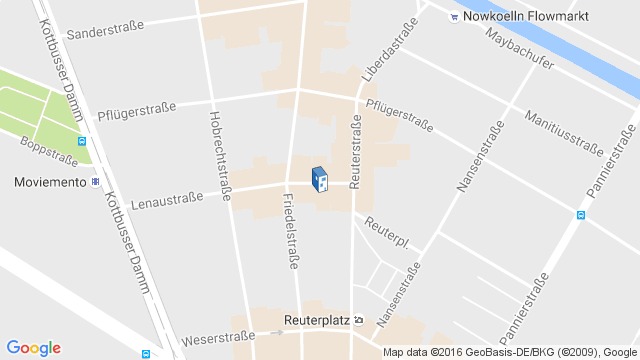 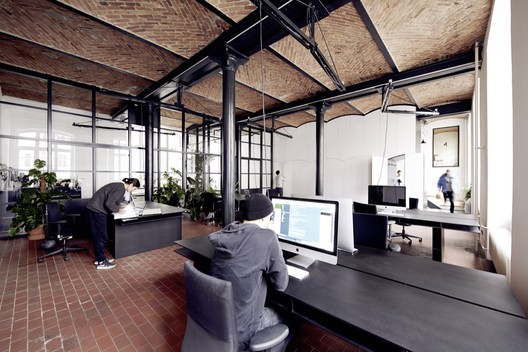