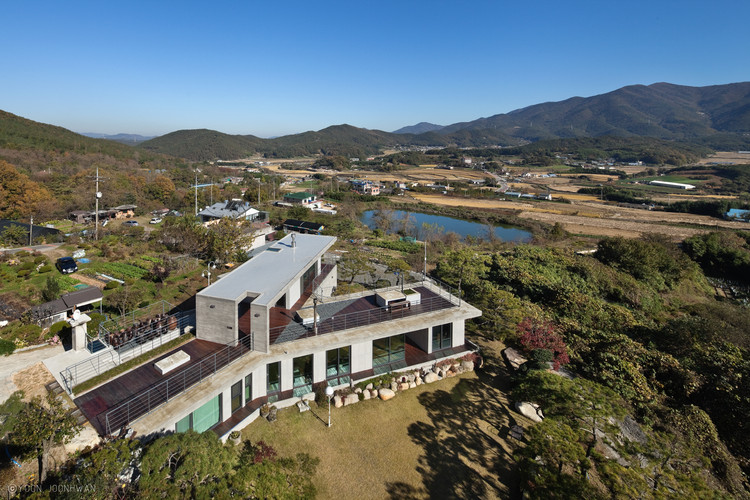 Text description provided by the architects. The project was to create a new living space in place of an existing old house where a couple has kept their country life. The main concern for the project was that introducing a unifying space of programs and nature while preserving the garden and site surroundings adorned by the couple over a long period of time. The new house is designed as a rural house which all elements such as living space, office and spacious log storage(indispensable for country house) permeate each other without losing their own independency.

The site has a spectacular view to the east, yet it loses the sunlight relatively early due to the mountains in the south. Therefore, in response to these factors, the house is arranged to make a shape so that not only the whole space can be exposed to the sunlight as much as possible, but also the house can exploit a good view toward the east with a small pond near the village as well as the surrounding mountains. The Y shape helps to connect the house, the office and the storage and also secures a separated outdoor space for each space as it works as an intermediate space projecting toward two different directions.

The converging point of Y, the heart of the house is arranged after a delicate research on views to all directions from the point. It embraces the living area and provides an immersive spatial narrative which is rendered by a communication between the main floored room (Daecheongmaru) and the outside void garden.

The architect asks himself a question whenever he designs a house; 'what do we need most to create an affluent life in terms of space?', and he believes the simplest answer is Korean style space where native Koreans have belonged until now. After various experimentations on modernization of Korean space, the architect has found out that diverse communications with outdoor space is the key to lead an abundant life in country houses. Therefore, in this project, many outdoor gardens such as upper garden, entrance garden, void garden, service garden, sky garden, crocks garden are produced. And then a number of modernized Korean style floored areas such as Daecheongmaru, Numaru and Toenmaru are designed to promote communication between the inside and those outside gardens.

Especially the Sarangbang located in the east work as a barrier against the direct sunlight in the morning and also as secondary view point separated from the Daecheongmaru and the living area. The diagonal glass wall line of living room helps the livingroom to embrace the Daecheongmaru as it draws the landscape of inner garden and void garden deeply in to the inside, and also it helps the livingroom to become a cool lounge area in summer as it increases the speed of wind flows across the Daecheongmaru. All of these various spaces of the house will lead the client to an abundant life. 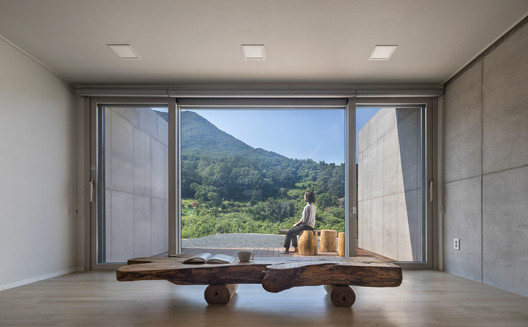