After yesterday’s devastating magnitude 6.2 earthquake in central Italy, art historians fear that numerous historic Italian buildings and their contents may be permanently lost. The affected region is dotted with hilltowns containing beautiful churches, monuments and museums, many of which have been rendered completely unrecognizable.

The town of Amatrice, which was voted one of Italy’s most beautiful towns just last year, faced some of the worst destruction, including to many of its acclaimed “Cento Chiese,” 100 churches filled with sculptures, mosaics and frescos. Notable architectural elements, such as the rose window of the 15th-century church of Sant’Agostino, have collapsed, while a remaining Renaissance palazzo has been converted into a temporary morgue.

Hauntingly, the clock face on the town’s 16th-century tower remains frozen at the exact time the earthquake hit: 3:36 a.m.

While saving lives and caring for the victims has been the government’s first priority since the disaster, the Italian Culture Ministry was expected to meet this afternoon to assess the extent of the damage.

Find out more about the extent of the damage here. 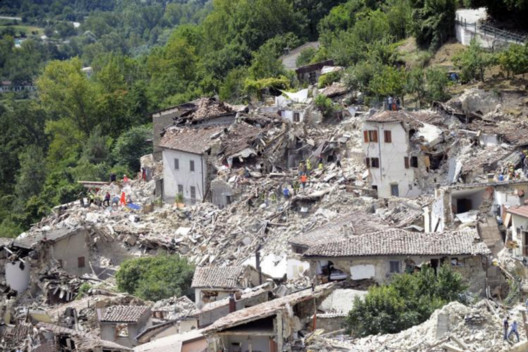