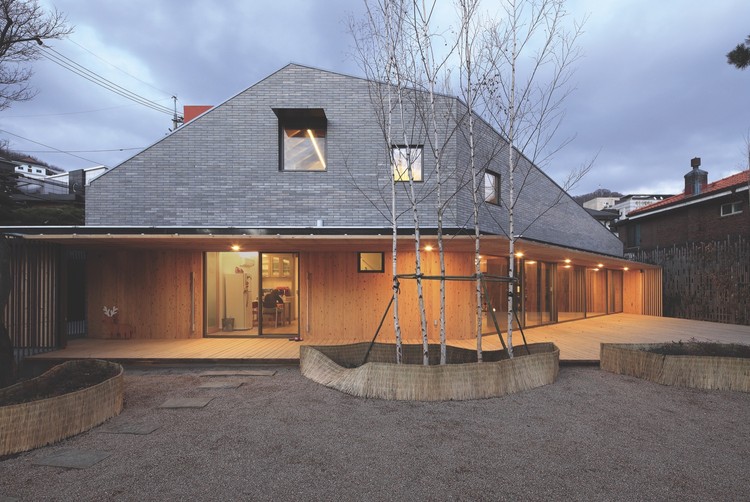 Text description provided by the architects. This house is for a residence and a studio of the percussion musician. Four plots are arrayed facing one another alongside two streets and in two houses on each plot parents and grandmother of the musician are already reside. Two plots are still empty and on two empty plots, houses would be planned.

We started from the placement of this house as a part of the masterplan based in the idea that one individual house on each and every plot. Eventually four houses for 3 generation were arranged around a courtyard in the center. Each house were consist of a low pitched roof on the first floor gathering toward the courtyard and a mass -placed on the upper floor of the low pitched roof - at the corner side toward the street.

The pitched roof on the first floor is rising toward the street side and it is automatically connected to the mass on the second floor. On that mass, private rooms are placed and under the pitched roof, there are studios and living room. Studios for practicing and recording were given an open characteristic by placing them next to the inner courtyard and street since there might be frequent visitor access. We placed the living room between the studios and the private rooms to act as a loose connection.

The structure and interior of the house is mainly wooden, since the sound was the most important factor while considering the proper structure. Two elements are creating a relationship between the performance place and the courtyard, one is a long and low –height is 2.2m- opening toward the courtyard, and the other one is a sufficient –depth is 1.8m- awning continues along the front facade. In addition we set a wooden folding door –it serves for a visual depth- on the inner side of the long and low opening for controlling the sound reflection of glass. We set a skylight at the meeting point of the pitched roof and the upper mass for the effective penetration of the natural light to deep space. And also, the cube formed mass and pitched roof were separated.

The cube formed mass on the second floor was consisted of rooms and terrace with a high density which is a clear contrast of spacious 1st floor. And orange-colored dry bit was applied on the exterior of this mass considering the most frequently used material in the neighborhood, the brick.

The fence as a boundary between the street and site is emphasizing vertical line by 10mm thick iron flat bar with 100mm interval which are aliened in diverse height reacting sometimes to the mass of the house and sometimes to the courtyard for solving opening and privacy at the same time.

Experiencing the unique sequence of space from street, courtyard, studio, living room on the first floor, terrace on the upper floor and finally to the dramatically opened roof top might provide rich architectural images not only to the residents but also to the visitors –mostly musicians- 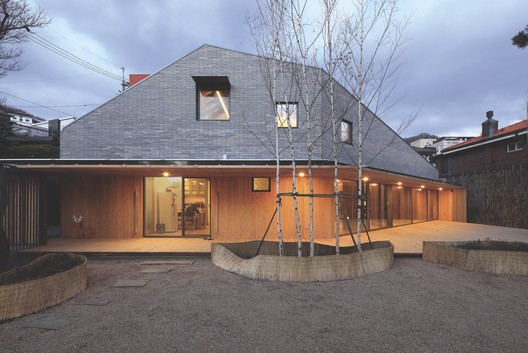