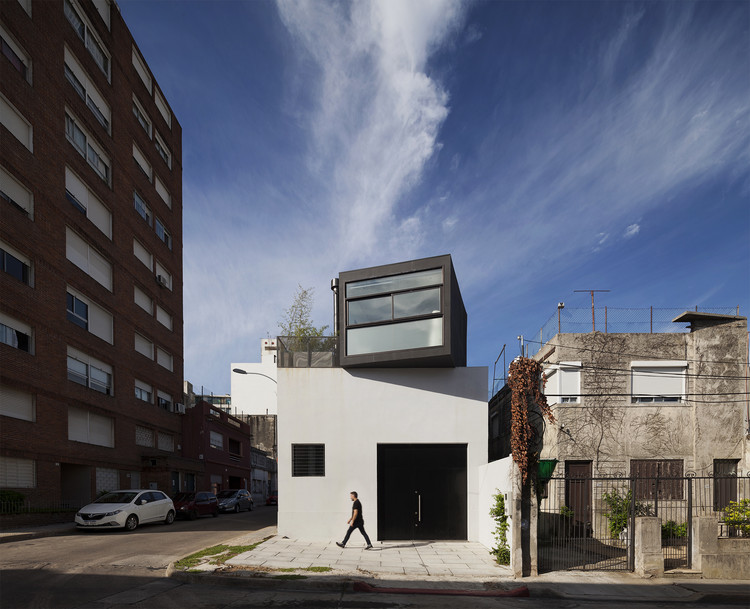 It’s a single family home located on a corner lot that occupies the interior of a small pre-existing warehouse, which previously accommodated a weaving workshop. The warehouse in its severity and introversion is utilized as protection from a very proximate urbanity.

At that time, we were interested in how William Kentdrige, on some of his choreographies, adapts his body to configure it into something else, a theme also very recurring in his engravings. Related to this premise and to produce an estrangement effect in the warehouse associated with other function, the house is constructed through the introduction of a foreign body that occupies it, shapes the interior and grows vertically until becoming visible over the rooftop as a strange object.  The result from this, is a strong contrast between a severe exterior ruled by the re signified warehouse and a flowing interior which section is resolved as an autonomous and introverted world.

The ground floor destined to accommodate the common spaces –living room, dining room, kitchen- is left completely free and opens to an interior patio located at the back. This floor is characterized solely by a lonely inverted V shaped pillar and the landing of the staircase to the ground. The mid-level, which QUARTERS Lola’s bedroom and a  studio, is organized as two arms supported on the previously mentioned pillar looking over the ground floor in a  marked sequence of double height spaces. The upper level, which contains the parent’s bedroom, rests over the walls of the existent warehouse and opens to a rooftop terrace which serves as a garden. The three levels are linked by a continuous staircase made of wood that in its monumentality contrasts with the small scale of the house.

From the outside the rough plastered walls of the warehouse contrast with the black volume that protrudes over the roof. 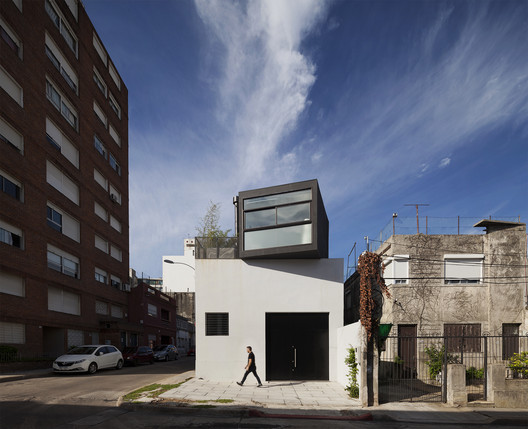