Save
The Roman Walls of Lugo Elevator / Antonio Pernas Varela 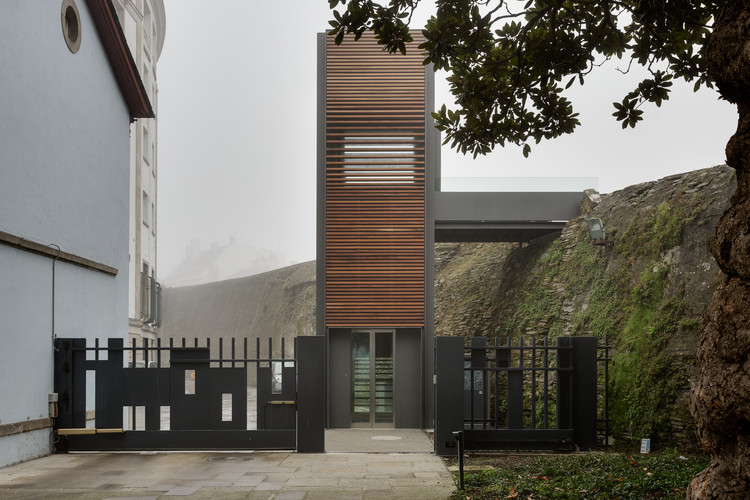 The Roman Walls of Lugo, built between the late third century and early fourth century A.D, is the only complete roman fortification that is preserved in the world, and therefore, one of the most important monument of the Iberian Peninsula. The Roman Wall and the Historic Center of the walled enclosure have the highest level of patrimonial protection in Galicia and was declared in November 2000 a World Heritage Site by UNESCO. The plot of the intervention is located inside the walls, next to the entrance to the public gardens of the council building. The plot has two main entrances, one from the inner round of the wall [still incomplete] by the West, and the second, through the Romans Lane, which communicates with San Marcos street, on the South. In the target area, the wall has a lower height than in the rest of its route. The Romans Lane, which connects the gardens with San Marcos street, serves the Council buildings and the National Insurance Institute, and has a secondary character in the old town scene. On the street there is already a communications tower of strong vertical component and great height. Also, the views from the street are altered by the distant vision of the party wall of a building located in the outer round. On the east side, from the parapet of the wall and inside the garden of the council, the large sized magnolias existing work as a screen minimizing the visual impact of the new element.

The parapet of the wall had no access that could be considered as accessible. For this reason, and with the aim to promote accessibility for all people, the location of an elevator on the far northeast of the enclosure was deemed necessary. The proposed intervention should provide an adequate response to the concept of quality of life and universal availability demanded by today's society. The design of the elevator should take into account the protection of the cultural values of the Roman Wall and the Historical Centre of Lugo. The criteria and architectural design solutions used should also be compatible with the protection and conservation regimes established by law for the corresponding categories of protection to these two cultural goods. The new element image, seeking to adequately respond to a current need demanded by society in pursuit of improved quality of life, should also be consistent with the historical moment in which it was projected and, therefore, the architectural culture and modern appearance. At the same time, the design should be eminently respectful and discreet in relation to the presence of the Roman monument, and especially with the views from the parapet of the wall or from the public space of the Outer Ring. They were set as priority criteria to minimize the height of the installation to limit its visual impact on the monument and ensure the structural independence of the elevator to the historic structure except for the landing on the parapet, where the necessary functionality and safety should guide the design of the game. As for the used materials, finishes were chosen seeking an optimal level of quality, by designing and selecting them within a framework of current sustainability criteria that take into account the durability, the natural aging by use and weather conditions, safety and ease utilization. As for the functionality of the facilities it would be considered, on one hand, the possibility of providing the elevator of an ornamental and/or functional lighting to allow its use at night and, on the other hand, remote access control and surveillance of them will enable. The commissioning of the project comes from the Dirección General del Patrimonio Cultural, Consellería de Cultura, Educación y Ordenación Universitaria de la Xunta de Galicia through a contest that included project contracting and execution of works in the elevator for a budget of material execution of € 76,153.93. The plot on which would have to locate the elevator was owned of the Provincial Council of Lugo that would transfer to the new facility. Once the work was executed, the installation would be allocated to the Council of Lugo City that

The location chosen for the elevator proves to be the most appropriate to minimize the impact of the new item on the monument by the lower height of the wall on that stretch and the immediate presence of large trees. The new element has two distinct parts. On the one hand, the box houses the elevator device, its guides and equipment and, on the other hand, the gateway leads to the walkway on the upper level. The upper boarding of the elevator faces the wall while the lower boarding is laterally disposed to have a safe and big space to wait. This configuration requires the provision of an elevator with double entrance to 90º. The resulting plan dimensions of the box are 2.40 x 2.40 meters and 7.80 meters height. It is the minimum emerging from the operational requirements of the lifting device. The elevator body adopts the dominant alignment of the buildings inside the walls of the immediate environment. The choice of this alignment is, on one hand, due to reinforce the character [is intended] of independence and respect to the monument and, on the other hand, to facilitate the agreement of slopes between the gateway and the parapet of the wall. The resulting box and gateway connection to the parapet are solved with steel structure. The vertical body is solved internally with folded sheet steel and coated externally with iroko wood strips, which are separated in the stops forming a lattice that allows a glimpse of the outside. The pavement of the gateway connection is made with a folded perforated plate that reinforces the sense of independence between the elevator body and the wall, and solves water drainage and the need for a non-slip surface. It has sought a high degree of prefabrication in the design and layout of each of the structural elements of the project. Over time it is expected that the wood acquires a gray color that fits naturally to the historic masonry wall and its living patina.

In the last decades Lugo City Council has stood by its commitment to accessibility, as evidenced by the Queen Sofia Prize for universal accessibility received in 2007 or his recent selection as the best accessible tourist destination for disabled people, in the second edition of the campaign 'Accessible Tourism Destination' driven by ThyssenKrupp Encasa. The elevator of the wall is the result of a long request of the social groups of Lugo, in particular the Auxilia organization, which for years fought to get this infrastructure. This achievement allows to complete an accessibility system that will open the use and enjoyment of the monument to all people. During its first months of existence, the presence of the new element has been accepted by the public as a necessary piece that agree with the openness of the city and the monument [the Great Wall is open to public use for free 24 hours a day]. During this time, the new elevator has not aroused great controversy and we could say its presence has naturally been assumed by the citizens, which, because of the sensitivity of the intervention, we understand as a success of our proposal 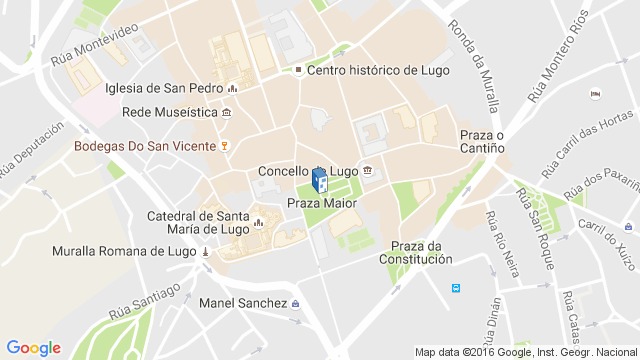 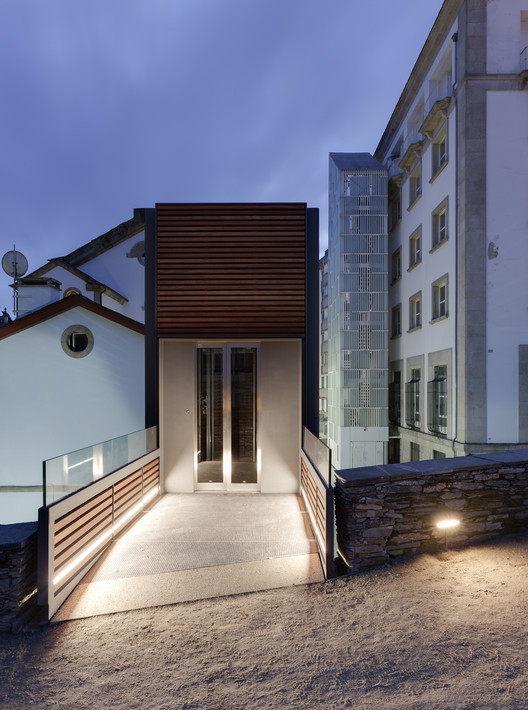