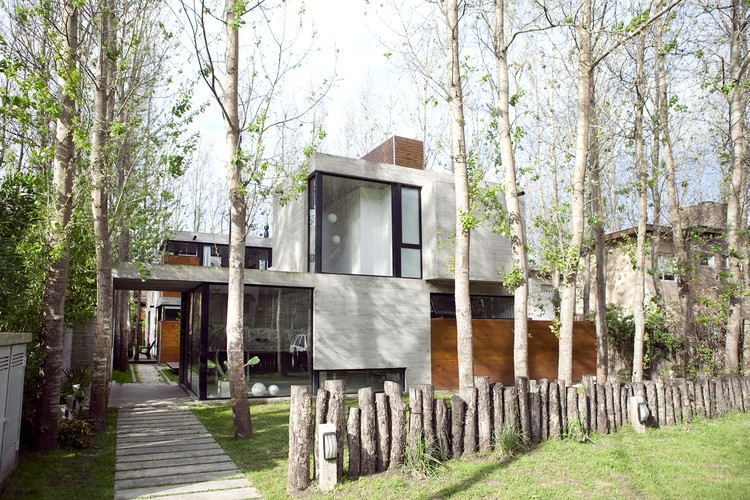 The place
Las Gaviotas is a small seaside resort on the coast of Buenos Aires located between the forests of Mar Azul and Mar de las Pampas. A virgin territory of fixed dunes with planted acacias and poplars to which is overlapped an orthogonal trace that defines lots suitable for construction of multifamily developments.
In this case it is an atypical parcel, of just 15 m at the front, with a dense and young poplar plantation, located 300 meters from the beach.

The commission
It’s a set of studio apartments for vacation, with a small administration and a house for the owners, in charge of the units’ exploitation. With a change of ownership involved, this property became a new two-room unit. The square footage to be built would be the maximum allowed under code.

The proposal
The project should fulfill the premise that the resulting volumetric accentuates the set idea by proposing common spaces and making imperceptible the individualization of each unit, without thereby resenting intimacy and privacy. So that each house should have two access and with its own expansions, and controlled views to and from common spaces as well.

It was proposed a three-dimensional grid developed on two floors alternating covered, partially covered and open spaces of different scale and use, keeping all the trees from being affected by the proposed construction. In this way the views from the units would be a cutout from the original green landscape of the lot and its vegetation would also serve to achieve privacy between the houses of the assembly and in relation to their neighbors.

The functional organization
Passing through the courtyard entrance you access the set by a semi covered directly related to the administration. The ground floor units are reached through a free path through the common areas and you access them by their private expansions. From the two main courtyards and through their own stairs you enter the upper floor units that have private terraces as expansions, which are created as a result of occupying the space reticule.
Each unit consists of a single room with two distinct areas: the sleeping room with a bathroom and a storing sector, and dining and sitting room with an area for cooking.

The construction
The work was done in exposed concrete, a material that unifies in a single element structure and finishing. H21 concrete was used with the addition of a fluidifiant so that this mixture, with little amount of water to harden, results very compact and doesn’t require sealing. In the bathroom and kitchen areas was chosen to solve them with dry construction: galvanized pipes structure and pine boards on the exterior walls, and plasterboard on the interior. The floor cloths are also from concrete screed divided with aluminum plates. The openings are of dark bronze anodized aluminum. Electric floor heating is used as heating system combined with salamanders.

The furniture
Except the beds, couches and chairs, the rest of the equipment of this house is solved in concrete.