Michael Maltzan Architecture has released new images of their design for the Moody Center for the Arts at Rice University in Houston, Texas, coinciding with the announcement that the building will open to the public on February 24, 2017. The building is conceived as a multi-disciplinary lab for creativity, which will contain “an experimental platform for creating and presenting works in all disciplines” as well as a flexible teaching space and a forum to host partnerships with visiting national and international artists. 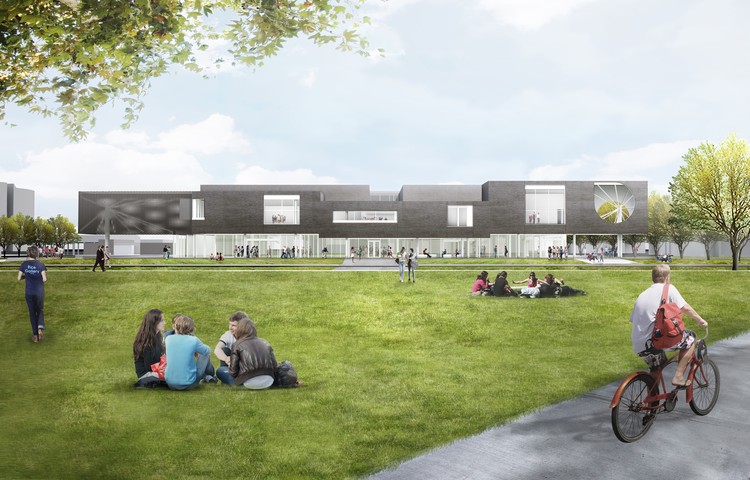 The $30 million, 50,000 square foot building will be located in the new arts district of campus, adjacent to the Shepherd School of Music and James Turrell’s Twilight Epiphany Skyspace. Program pieces in the building include an art gallery space, a 150-seat black box theater, a experimental performance space and a cafe. These spaces will be centered around a light-filled atrium containing a fully-fitted maker lab, with immediate access to a wood shop, metal shop, paint booth, rapid prototyping areas, classrooms, a technology library and AV editing booths.

“The interior of the Moody is designed to foster a sense of openness and possibility” said Michael Maltzan. “The double-height makers’ space at its heart can be imagined as an interior quad, echoing the other quads found throughout the Rice campus. This interior landscape brings the most diverse programmatic functions into contact with one another, while opening views out to the campus.”

“This emphasis on transparency extends to the building’s exterior, whose brick-clad upper story seems to float over an entry level encased in floor-to-ceiling glass. With pedestrian paths cutting across the site’s open lawn and into the building, a set of stairs on the north façade turning back to form an interior amphitheater, and the cantilevered mass of the second story creating covered walkways below, the Moody will be one of the most active social spaces on the Rice campus, and a welcoming facility for all of Houston.”

Development of the Moody is made possible by a $20 million grant from the Texas-based Moody Foundation, a charitable organization with an emphasis on education, social services, children’s needs and community development, with additional generous support from the Brown Foundation and other donors.

The Moody will also contain facilities for its first artist-in-residence program. The first resident will be Mona Hatoum, an internationally acclaimed Beirut-born Palestinian artist whose sculpture, performance, video and installation pieces are currently on display as part of a major survey exhibition at the Tate Modern in London. Hatoum will begin her residency in spring 2017, following the completion of the building, to develop works for a major exhibition to be displayed at Houston’s Menil Collection in fall 2017.

Development on the Moody is funded by a $20 million grant from the Moody Foundation, a charitable organization that places an emphasis on education, social services, children’s needs and community development. Additional support comes from the Brown Foundation and other donors.

The building is currently under construction.