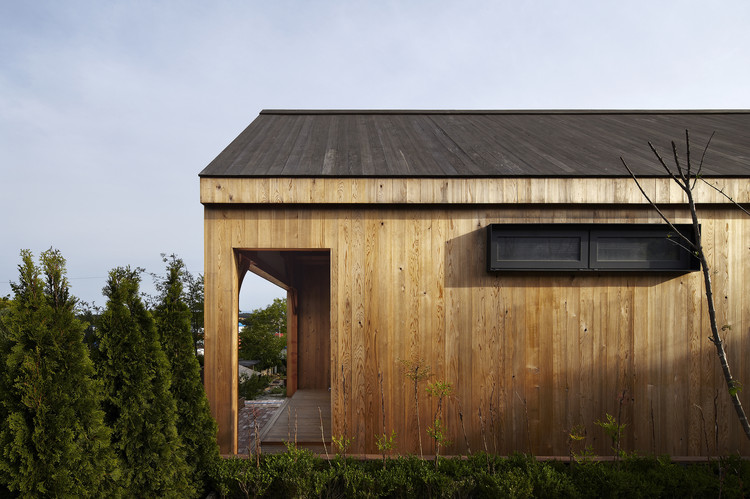 Text description provided by the architects. In Jorge Luis Borges’ novel of same title, ‘El Aleph’ is the one site which contains all the places in the universe, as well as all stars, all lamps, and all sources of light. It is also the first character of Hebrew, and the beginning locus of every memory.

Designing the house in Domoon was just like being in Aleph, a project to transcend time, to share memories and places. Going through the process was like solving a puzzle; putting odd pieces together to make a complete whole.

Sokcho region is a port city in the east coast of Korea, surrounded by chain of Seorak Mountain. You can gaze ocean and mountain in one frame, a place showing every color under gaudy sun and wind.

One day a gentleman came from Sokcho to erect a house. The site was in Domoon-dong, which is an old town near the mouth of Seoraksan Mountain approach road.

Domoon means a door(moon, 門) to enlightenment(do, 道). There are two aged legends about the origin: One stars a monk who found great illumination in this place to open ‘the door of enlightenment’, and another is that this place is the first gateway into where monks go into Seoraksan Mountain to cultivate their religious awakening. Hence, Domoon-dong is the oldest town in Sokcho.

The site was quite large, and there was a tiny old house in the corner. The exterior of the old house was finished with wood instead of plaster, which made this house special inside, compared to other old houses around the area. The space inside was arranged as traditional Korean house in cold region, ‘Kyup-Jip(겹집)’, with space arranged in stacking shape(田).

Old wooden finishing were discolored beautifully over the years, and the rusted tin roof was old but natural. With a bit of repair, people could live in an instant.

In most of the cases, when we remove inside walls and ceilings of an old house in Korea, we would find a panel on the girder, put on the day of roof-raising construction process, to record the history of the house. The panel (sort of time capsule) would show us various information about the house including when it was built. But unfortunately, we couldn’t find any clue about this house inside.

Then one day, an old passer-by told us that he was born in this house and this house was actually moved from original location and rebuilt about a hundred years ago from a monk’s lodging near Ulsanbawi Rock in Seoraksan Mountain. It transpired that this house was older than a century. And during the difficult construction, we found there are two Seongju-sin (house god) in this house. One god came from the original house in Ulsanbawi, and the other one was in Domoon-dong. The god from Ulsanbawi was high in rank, so he insisted that he is the owner of this house to the Domoon-dong god. Even worse, he kicked the house to threat the Domoon-dong god to make him leave.

This story was all from the dream of the carpenter. Everybody may laugh this story off to think the carpenter was merely inspired by the hundred-year-old house. But the carpenter, owner, and we didn’t laugh off and took this story seriously.

One night afterwards, the carpenter met the Domoon-dong god in dream and the god bowed his thanks for mending the old house. And the god said that if this construction ends, he will be driven out from the Ulsanbawi god, so he asked the carpenter earnestly not to finish and put a little aside.

The carpenter awaked from the vivid dream, and changed his mind of leaving halfway since the work was too tough. After hearing the story, we decided to enshrine each two god’s mortuary jar in the hall and the room, and move the Domoon-dong god’s jar to the new house after completion. In any case, there are lots of things that we don’t know or can’t see but exist out there.

That was how we restored the past of the land. After winter, when spring was just around the corner, the house was completed and people offered sacrifice to spirits on a snowy day. That night, the owner found one tiger butterfly turning up, circling around the house, and flopping out.

We are not sure if the Seoungju-sin (house god) really exists, but we think that building a house or meeting a land is not a mere coincidence, but happens through a string of amazing relationships. We don’t want to bet that a simple result of coincidence became these series of process: the owner was planning to tear down the old house to use the lot as a parking spot, but meeting us changed his mind and eventually saved the old house.

Sometimes when we rescue houses from tearing down, we feel that there exists some complicated and bottomless ego in old houses. Usually, building a house is a process between the owner, architect, and land exchanging opinions, making concessions, and giving self-assertiveness. It’s like solving a complicated equation.

Fixing an old house is like inserting another ego named house barging in the relationship of the land, owner, and architect, and it makes the equation much more complicated. It’s this moment for the architect to listen carefully to each story and convey it between them and synthesize, to deduce a result carefully not to make a quarrel between them. The old house in Domoon-dong became neat and warm again, though we don’t know how much the gods or the owner are satisfied.

While renovating the old house, the owner changed his mind about the shape of the new house. The original idea was to build it in a big, rigid form, but he became to ponder about a suitable size for living and comfortable materials. The final shape resembled the old house and also the surrounding mountains.

First, we divided the house into two and arranged them toward south side to let the sun in. One became a main building(Anchae, 안채) with kitchen and rooms, and the other one became the guest house(Sarang-chae, 사랑채) with livingroom-cum-music salon and attic. In so doing, there became three houses soaring upwards like mountains from the land.

When designing and building a house, we encounter some unexpected situations or unsuspected stories. Onto the framework of time and memories, the will of human and land are placed, to frame present and future. In that respect, architecture is a complicated and multidimensional structure.

Doors lead us to go somewhere in or out. Gaze of eyes go in and out through windows and space cross between doors. The door let us enter into a new world like the rabbit hole of Alice. Architecture is a door to let us cross the border of world and family, past and present, or present and future. 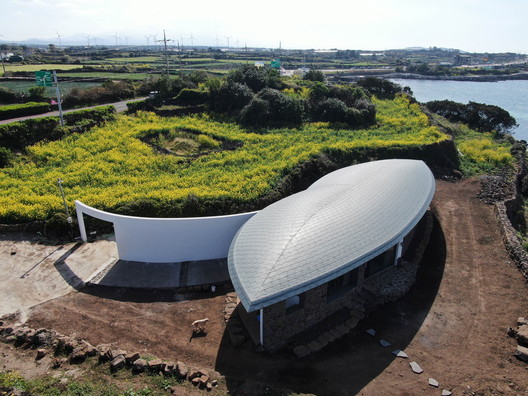