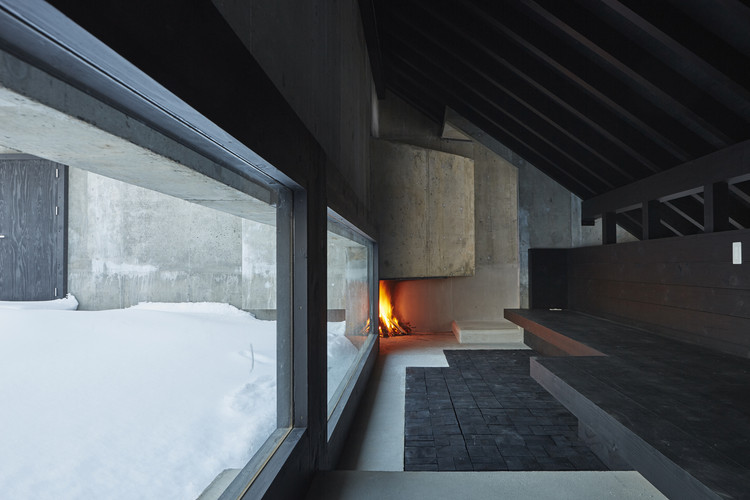 Text description provided by the architects. In April of 2015, The Oslo School of Architecture and Design (AHO) was awarded the first prize in the LIXIL International University Architectural Competition. During the following summer, we developed the project in detail and made construction drawings, supervised by architects from Kengo Kuma and Associates. This winter, the Inverted House was built in Taiki-cho, Hokkaido, and we were working closely on site with the local contractor throughout the process. Now the house is awaiting its new life as the 5th competition house on the open fields of Memu Meadows.

The theme of the competition was atypical: “House for Enjoying the Harsh Cold”. Traditionally, architecture has created a strong division between inside and outside, keeping the cold at bay while preserving heat within. The Inverted House seeks to challenge this idea and to bring the ‘harshness’ of the world into the house itself. By minimalizing heated interior spaces and creating a series of sheltered exterior spaces, the building reads the legacy of traditional Japanese Sukiya-zukuri in the light of Scandinavian frugality. Its rough walls create a clear division in the landscape, holding together precisely articulated wooden roofs and floors. The resulting unity becomes an instrument, using wind, snow and sun to change the feeling of the world for its inhabitants.

The house is approached through the first space defined by the cross-wall: the Garden Room, that gathers snow in winter and keeps it until late spring in the shadow of the high walls. From here, the Outside Living Room is entered through the main entrance, where a series of elevated wooden floors leads to the fireplace, while a large, gently sloping roof extends toward the surroundings and the sunset. Adjacent, the Room for Cooking is protected from the strong winds by a very steep roof. A narrow passage around the cross wall leads to a protected interior, the Inside Room, a narrow, dark space, heated by an open fireplace. A long, low window focuses the view on winter snow or summer flowers in the Garden Room outside. At its other end, one finds the most intimate spaces: a bathtub is hidden beyond the wall, closely under the roof, and a sleeping platform floats above the snow, facing the sunrise, with a roof opening towards Memu’s full sky.

We imagined Inverted House as a delicate instrumentation of many pieces, rather then one dominating concept. Each wall, floor, roof, pillar, and step, has been carefully considered in proportion and relation to the building as a whole and to the world in which it is built. 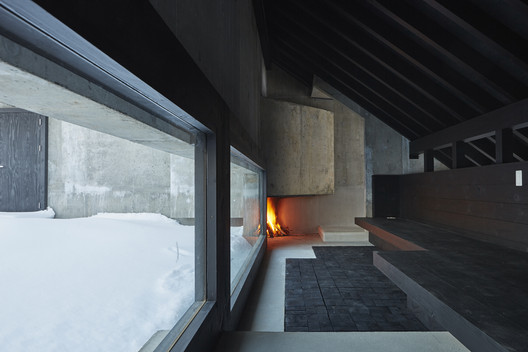