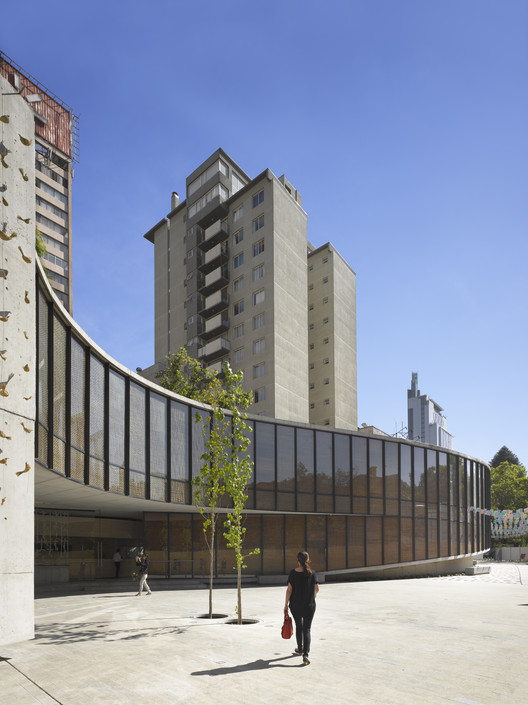 Text description provided by the architects. This museum stands as a tribute to Violeta Parra (1917-1967), one of the most complete and notable artists born in Chile. The multiplicity of her facets, (music, poetry, visual art, ceramics, popular researcher, stubborn defender of the people, uncompromising artist) make her work and her life a kind of cultural kaleidoscope where multiple edges and infinite reflections are mixed.

The museum is located on the edges of the historic center of Santiago in the "San Borja" neighborhood, an urban area that has evolved from a compact city model to a city of isolated towers where the formal clarity of traditional public space has become blurred in time.

The site, a large rectangle 44 x 95 meters, is between two important streets in the urban fabric of the city, Avenida Vicuña Mackenna (east boundary), one of the structural axes of Santiago.

The Violeta Parra museum assumes the longitudinal deployment of its facade as urban strategy, with the responsibility to shape the pedestrian walkway. Compression and expansion of this facade along the route results in a figure whose variable width imposes slower traffic on the urban space. Within this route,the access to the Museum is defined by a broad concavity which suggests a pause in the journey.

The main facade of the building, which receives light from the south, is made up of double glazing panels with a wicker weave in between, which allows on the one hand, the passage of subdued light and on the other a private and protected interior. This wicker weave announces, from the urban space, the artist's commitment to craftsmanship.

Inside, a set of curves and counter curves refer to a rich and complex microcosm, anticipating the multiple realities that Violeta Parra witnessed.

The "anchor" programs are located at the ends of the building. To the west there is a small 100-person auditorium, while the exhibition halls are located on the east. The internal circulation extends into the room on the second level, through a ramp that rises between the wicker weave and the wall of the rooms. There, a set of strategically arranged windows reveal the inside of the exhibition halls.

The offices and archives, located on the second level, extend between the exhibition and auditorium areas. Outside, on the top floor, garden areas prolong the central courtyard vegetation. The idea is that the green covers the interior walls of the courtyards obliterating the architecture and displaying a vegetable universe as the dank and cold jungles of southern Chile that Violeta Parra loved. 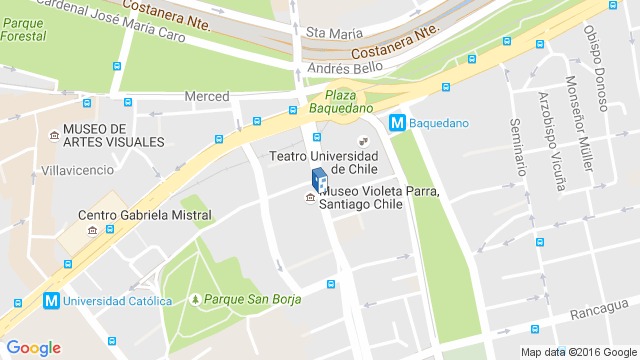