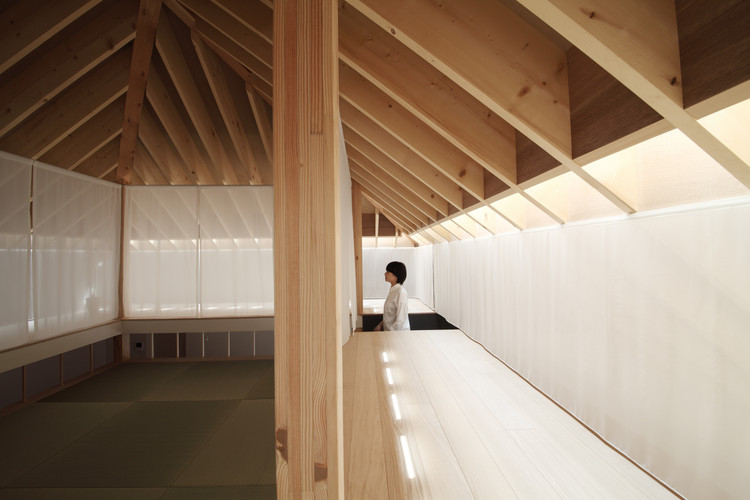 Text description provided by the architects. How will housing change as societal aging accelerates? This time our clients are a couple of retired husband and wife in their 60s. We planned a small house with a square roof for them, considering "the aging society" and "the way of housing" in the future.

The site is a newly-acquired lot conveniently located in a quiet residential area. The clients requested that we not just build a house but that we make a new place where we can interact with our neighbors and that we make a residence where they would be able to enjoy their hobbies indoors and outdoors. Upon this request, we planned an interaction space (a place open to the public) in front of the building facing the road, and we also planned a home garden behind the building (the location facing the neighbor's agricultural field).

Four areas — "veranda," "living space," "light veranda," and "visitors' room" —constitute the plane.When we considered the life of the aged, we thought that non-daily lives and time such as tea parties at home or their adult daughters' visits would be important while it is necessary to privide functions for daily lives such as eating and sleeping. So we planned so that each area would be connected with each other depending on the situation, while maintaining fuzzy borders among them, thus making it possible for daily lives and non-daily lives to be intertwined.

The veranda surrounding the building functions as a place of friendship with neighbors and neighborhood gathering on the east side, and as a resting place on the west side when the clients work in their home garden. It also functions as a traffic line from the entrance when they have a tea party. The veranda is a structure that creates a physical and temporal distance between the living space and the tea room, and it helps visitors to realize the end of their daily lives and the beginning of their non-daily lives.

The living space surrounds a square storeroom situated in the center. Located in the center on the second floor is the visitors' room. It is expected to be used flexibly as a tea room, a guest room, a reading space, etc. Floated around that visitors' room is the "light veranda," whose soft light wraps the visitors' room. On the "light veranda" light from the top lights on the four sides diffuses among sheets of translucent cloth and creates a pool of light. It also creates a scene in which light moves and fluctuates in intensity in response to the movement of natural wind.

For this house, after deciding on using the customary form such as a square roof, a veranda, etc., we focused on the relationship between daily and non-daily, and then by adding a "light veranda" as well as the normal "veranda," it has become a house with various kinds of involvement with nature and unpredictable scenes under the roof. We always place an emphasis on the fact that simple configurations may create various kinds of involvement, and we feel possibilities in developing the already existing formats rather than architecture that expresses newness itself such as the discovery of a new scheme. 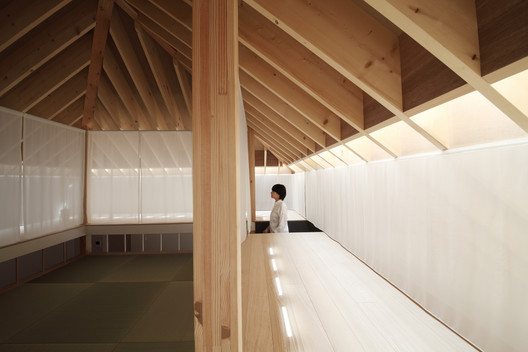