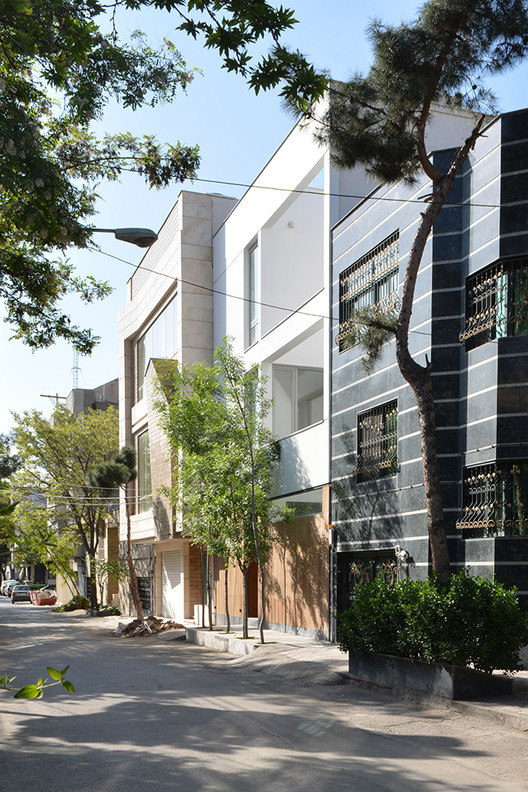 Text description provided by the architects. Bozorgmehr house is a single-family house in three stories built in an infill block of a low dense alley in Mashhad, Iran. In this neighborhood most of the blocks are 250 square meters lots and from years ago one or two story villas were built in 60 percent of these lots. As a result of ascending cost of lands, materials, and the construction over years, these single-family houses have been demoed and replaced with two or three story apartments, which occupied most of their yards with a minimum set back. Meanwhile reaching the maximum rentable area or an attractive façade seemed to be more substantial instead of the architectural approaches that resulted spatial qualities.

In bozorgmehr house, we tried to create various dynamic spaces supported with approximate amount of natural light and views of greeneries, while maintaining the coherency and unity of the whole spaces.

To create an effective visual and physical connection between inside and outside, we placed a northern yard and an inner void in the middle of the house and reconfigured the landscaping of the main southern yard.

The northern yard, placed beyond the façade frames, not only connects the adjacent spaces (the entrance, kitchen, and rooms upstairs), but also creates controllable desired views of greeneries next to them. The exterior frames in addition to minimalizing the façade, allows the warm southern sunlight to nourish the northern trees as well.

The void, invites the sunlight into the house that creates a stronger bound between inside and outside. This light is a reflection of environmental changes in the building and generates a relationship between the interior and exterior and results various interior spaces, motions, and a contrast between light and shadow during different hours of day and seasons.