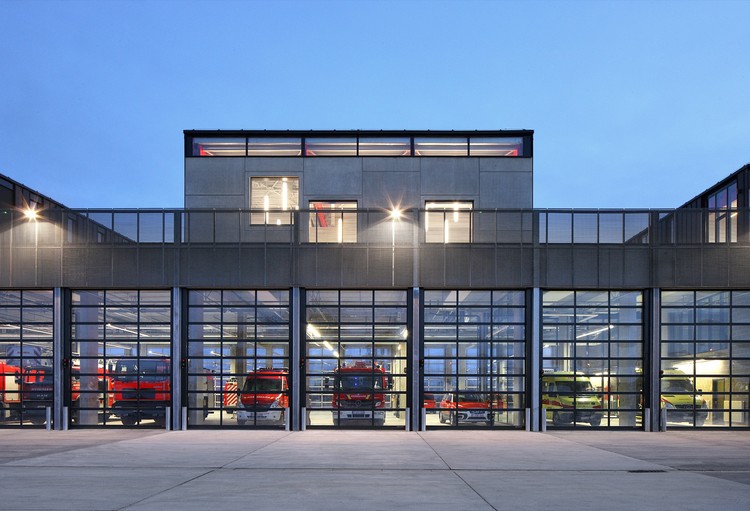 Text description provided by the architects. The project is the result of a competition initiated in 2009 by the Town of Asse, Belgium for a regional fire station and a youth center. The site (a brownfield of formerly asphalt production industries) is located on the outer edge of the Town Center. Beyond the ring road the landscape is open, rural. A “land-form” concept was developed as a means to preserve existing landscape features and create a dialogue between the new buildings. The land form is scaled appropriately to the landscape and organizes the new buildings – a youth center and a fire station – into one common shape. As a singular and bounded entity, the form does not suggest sprawling growth in any direction, but rather offers a clear vision for future landscape, infrastructure and building decisions.

A subtle bend in the landform and building denotes the principal entrance to the site. A clear solution had to be found for addressing the public functions given the multiple buildings (where is the front door?). As opposed to a strip of buildings with a parking lot to serve as the main orienting device, a public plaza between the youth center and the fire station serves as a formal front. Custom pavements, markings, road obstacles, street furniture, lighting, local trees and plant species, and a smooth topographic contour break down the scale of this large universally accessible plane.

The plaza acts as a ‘town square’, gathering and distributing the many building users: pedestrians, cyclists, cars, buses, emergency vehicles, and fire trucks. Both the fire officers and youth center have staged public events and festivals in the square. It is within the public plaza where a fundamental ideological basis for the project is confirmed. Upon entering the plaza: the site, form, and scale akin to a “Big-Box” setting are designed to create a civic environment.

The Fire station has a solid, sober, and functional appearance and maintains a banality characteristic of Big Box typologies. Building voids in and around the programmatic spaces reveal the buildings economical and repetitive construction logic. However, through detailing precision, material joints, alignments, and finishes –any sense that this is a conventional building technology is disrupted.

Within the building, a circulation corridor cuts through the programmatic spaces, extends vertically via a long continuous stairway, and follows the curve of the building. The upper levels, which house the private living and sleeping quarters of the fire officers, are formally distinguished. Four volumes, each with different functions (kitchen, dining, private rooms, gymnasium), roof slopes, and separated by roof gardens are supported and punctuated by red painted glue laminated beams. 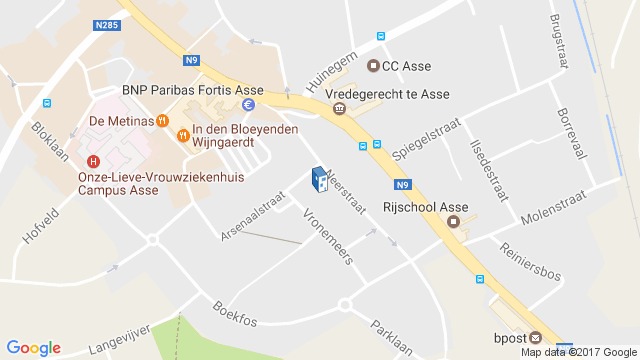 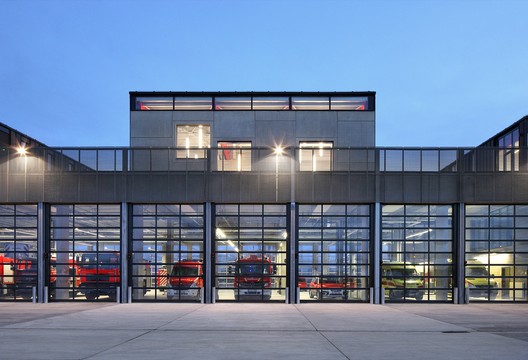