With the opening ceremony of the Rio de Janeiro Olympics fast approaching, the city’s preparations have hit another setback. The main ramp at Marina da Gloria, which will serve as the Olympic sailing venue over the next few weeks, has partially collapsed. The structure was intended for temporary use as the main access point for boats to enter the water. No one was injured in the incident.

Philip Wilkinson, a spokesman for the Rio 2016 organizing committee, said the damage was caused by high tides and a stormy sea, and that a construction crew has already been contacted for repairs. The ramp is expected to be back in working order within four days, just three days before sailing events are scheduled to begin on August 8.

“It would be wrong to make a great deal” of the Marina da Gloria incident, said Mark Adams, International Olympic Committee spokesman. “In the run-up to the games, things happen.”

This comes after a fire in the Olympic Village on Friday forced the Australian Team to evacuate the premises. While their building was left unoccupied, the team’s uniforms and several laptops were stolen from out of their rooms.

Another recent incident in Rio saw TV Studios on Copacabana Beach near the volleyball arena flooded with water after the weekend’s exceptionally strong winds. Iron boards were needed to contain the force of the waves.

Apprehension over the safety of Rio’s construction standards has been growing since April, when a 50-meter stretch of a bike path constructed for the Olympics collapsed, killing two people.

News via the Associated Press. H/T The Guardian. 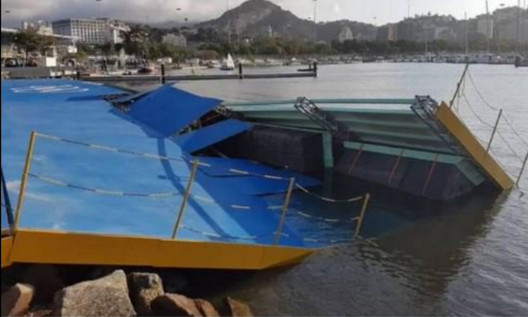