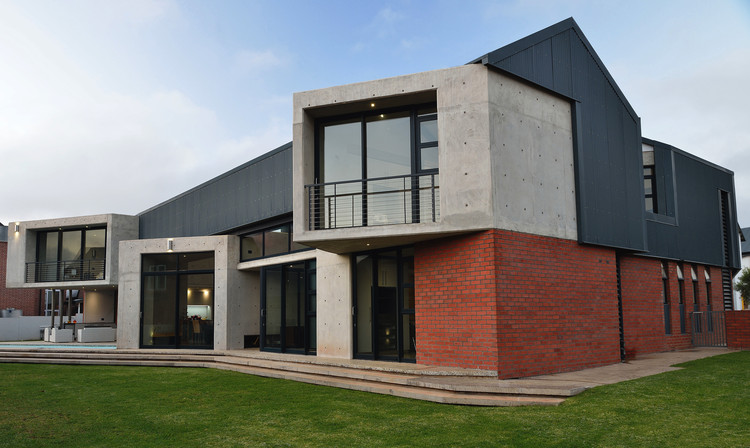 From the architect: This four-bedroomed family home is located on an eco-estate in the farmlike suburb of Irene on the Highveld of Gauteng Province, South Africa. Strict design prescripts exist for the construction of dwellings on this pastoral landscape. In addition, the climate dictated an intimate relationship between the spaces of the house with the topography of the site. Influenced by these demands for synergy with nature, the design had its genesis in the concept of heliotropism. To achieve this balance, the beauty of the natural growth processes followed by sunflowers was utilised.

Each cube of dynamic living space was situated such that it allowed for the best possible exposure to sunlight and other eco factors, much like the florets of the sunflower itself. The double-storey also mimics the differential growth of the stem of the plant where an auxin accumulates on the shaded side when conditions of unequal light prevail.

The façade facing away from the sun is designed to provide maximum privacy and provides a clear definition in the relationship between the public and private spaces. The iron cladding that envelops parts of the structure visually forms almost a dark, moss-like symbiotic relationship with the red bricks and concrete. It is in stark contrast to the light-infused back of the structure which is in direct contact with the verdant surrounds. The staircase forms a solid anchor between the different elements of the construction.

The basic and monolithic form is divided into angular concrete-framed spaces designating the living, dining, cooking, entertainment and sleeping areas. The top floor houses the bedrooms. The privacy of each room was valued as they are separated into two wings by the living areas below. 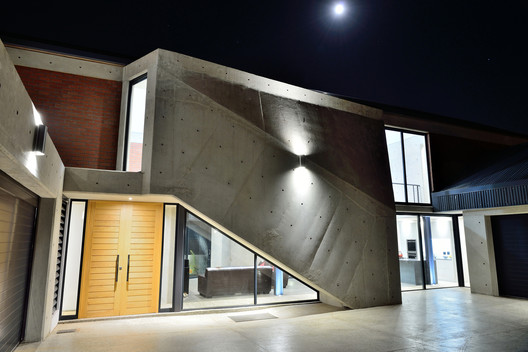