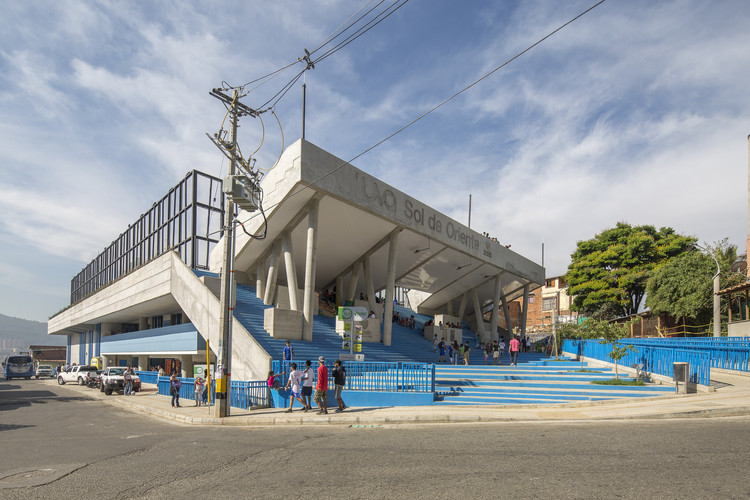 Text description provided by the architects. Articulated Units Life, UVA, are urban interventions in neighborhoods, intended for the public meeting, the promotion of sport, recreation, culture and community participation, under the concepts of:

-These spaces are articulated to a high offer of programs for sports, culture and recreation.

-Revive restricted urban spaces in effective public space understanding that in Medellin we have few spaces for new infrastructure, areas such as soccer fields are an opportunity for the development of new projects multipurposes

-Light for Recovery Regarding Urban

-Spaces to Enjoy with the Five Senses

-Architectures that interact with the public, which generate experiences, to walk through various programs and the interaction with water in public spaces.

The UVA (life articulated unit) Sol de Oriente, is the transformation of an old neighborhood soccer field built in sand located in the top of the slopes of Medellin, used intensively by all its inhabitants in different sports and community events. It is a strategic icon in the historical memory of people, protective equipment against urban sprawling and a strategic project of the Comuna 8 of Medellin. This project was conceived from a collective construction by the ideas of citizens and embodied in imaginary workshops with a lingering interest to preserve the soccer field and its original measures, along with the opportunity to incorporate a range of various services to the community without leave aside their sporting traditions.

In an urban level, this equipment located on the edge of the city is part of a comprehensive transformation of habitat framed in the Metropolitan Green Belt project, corresponding to his fringe of consolidation was thought as part of strategies to curb the rapid growth of the urbanization toward the high side.

In the Cerro Pan de Azúcar of Medellin was formulated this urban-rural master plan, a sector that for many years has been affected by violence and social debt of the state, but in the last eight years a high public investment has been made by the government that has allowed it to offer quality in all development programs to close this gap of inequality, thus achieving that quality public facilities become a platform for social transformation, in this case sport, culture and recreation merge and create a multipurpose equipment, giving a new meaning to the community imaginary and the stories that were lived there.

"We learned to listen to our main clients, the citizens"

From participation and community ideas a urban transformation was generated “to elevate" the existing soccer field and fold it to create a seats system which serves too as a large square, a privileged public space opened 24 hours to people. Once elevated, an architectural program of services is inserted instead of; it goes from one to five new sports scenarios for citizen meeting, sports, fitness, dance hall, auditorium, commercial spaces, community rooms and playroom among others inserted in its place.

"An open architecture, where the act of approaching is friendly to citizens, pleasant transition spaces between the street and the depths of the building connected to the neighborhood daily."

This building is a volume in concrete specifically crossed in the middle by a neighborhood street that connects the existing health care center and surrounding houses. A series of vertical sunbreakers are part of bioclimatic strategy for solar protection and building identity itself through color in their facades, crowned by a soccer field in synthetic turf of high quality for a popular neighborhood of Medellin, which replaces the polluting dust of the previous court, to become the new icon and referent. We have made of public architecture, a reference that dignify the poorest areas of the city.

It is a soccer field- terrace, a mixture of two fundamental spaces in the way we live our hillsides, the soccer fields are sacred scenarios in the neighborhoods of Medellin, the terrace as the neighborhood house’s is that intimate space for future growth of our homes has become in the setting for many activities in daily life, for our mountain condition are privileged city balconies. 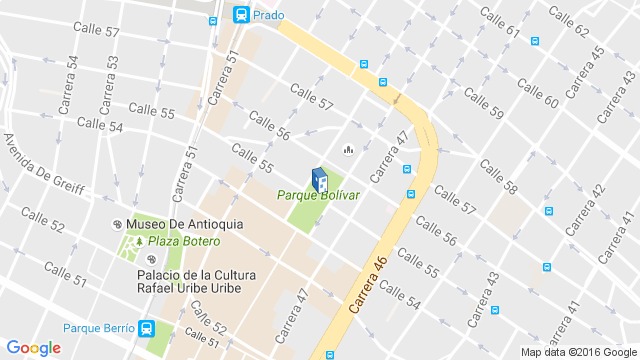 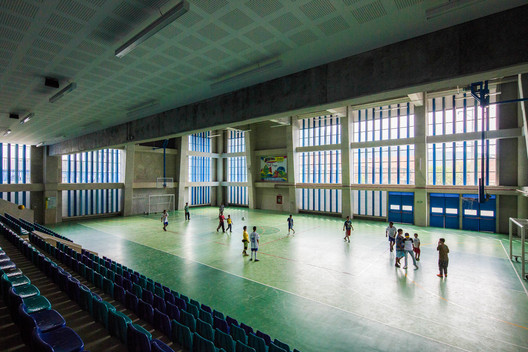 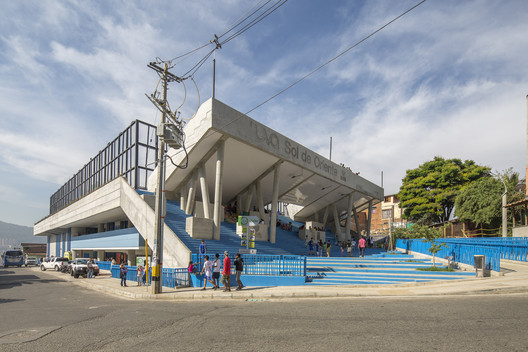