All
Projects
Products
Events
Competitions
Save
Standing Out or Fitting In? How Do Architects Approach Their Context
Share
Or
Copy

All architects desire recognition of their built work; for their signature design style to be identified, or for the quality of materials and details to outshine those around it. Unfortunately, if every new architectural structure was to insert itself into its context looking to be the star, soon it would become impossible to gauge the civic relevance of the area. Some buildings, such as Daniel Libeskind's Jewish Museum, appear dislocated with due cause, but others stand out for the sake of standing out, turning their back on their rich historical setting.

While there can be no singular strategy for contextual integration, Kurt Kohlstedt argues that a consideration of historical context, whether eventually chosen to acquiesce with or deny, will result in richer and more engaging built environment. In his latest essay for 99% Invisible, Kohlstedt unpacks the myriad ways in which a new building can engage with what was there before, highlighting examples which successfully and unsuccessfully take up the challenge. He acknowledges the difficulty of finding the sweet spot, as many designs are unable to navigate the "fine line between contextual and contemporary."

In his article, Kohlstedt explains that it's not hard to draw up examples of buildings that are so contemporary they sit disjunctively within their surroundings. Much of Libeskind's oeuvre, including his Royal Ontario Museum and the Jewish Museum in Berlin, appear foreign against the backdrop of heritage buildings. In both cases, the differentiation of the new building is justified by a program contained within the extension. The shock of their presence contributed to their status as icons, as their innovative form creates a wave of public response. Within their immediate landscape, they are obviously new and are not encroached by a landscape of competing icons.

Kohlstedt goes on about how the new building phenomenon is especially apparent in Paris, where structures such as the Eiffel Tower and I.M. Pei's Louvre extension were initially abhorred, but public interest over time has seen them canonized. This could be seen as a version of the "Bilbao Effect," in reference to Gehry's Guggenheim Museum catalyzing a wave of interest and tourism to the Spanish city of Bilbao. While architecture can become iconic by the newness of their form and expression, if the same attempts at iconicism are constantly occurring without awareness of their impact or transition then it results in an unconsidered cityscape.

Extremism can be just as damaging when concerning mimicry as it is with exhibitionism. If a building tries too hard to "fit in" it may become nothing more than a crude copy of its surroundings. Kohlstedt asserts that "rote historical mimicry and facadism can be problematic as well for the legibility of a city," as building in bygone styles begins to create a city of replicas rather than relevant structures.

Fortunately, if there are two ends of the extremism spectrum, between them lie infinite possibilities in terms of successful integration or visibility. Within his essay, Kohlstedt identifies several key projects which manage to navigate their context in ways which enrich rather than detract. All of these projects show an awareness of the historical stratification which occurs when people can discern the oldness or newness value of their surrounds, and form a logical response to the problems at hand.

To read Kurt Kohlstedt's essay in full, head to the 99% Invisible Website.

Share
Or
Copy
About this author
Lauren Crockett
Author
••• 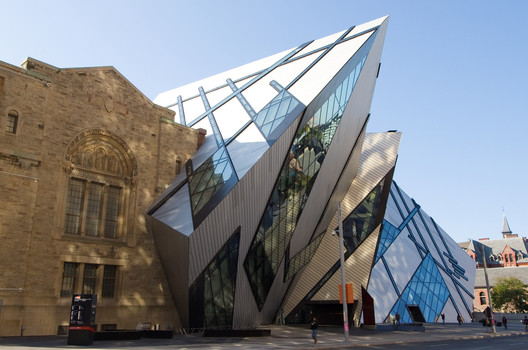