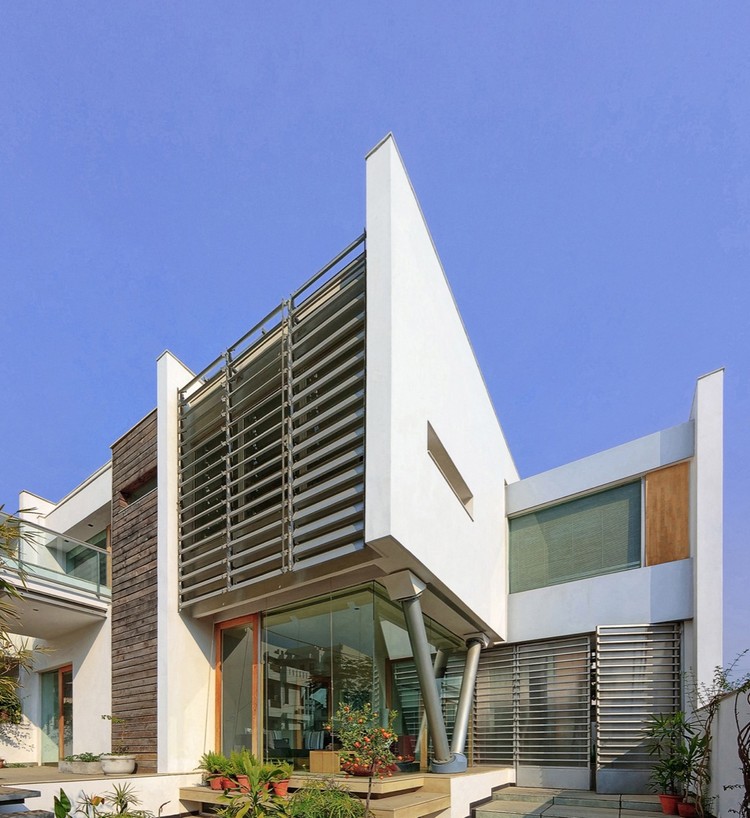 Text description provided by the architects. As affordable land is getting scarce in cosmopolitan cities of India, development has spread to their fringes. This move towards the suburbs has resulted in extensive developments including vast residential zones and commissioning of new private houses.

This new family house with three independent floors is such an example spread over 350 Sq.mt. plot of land. While the upper floors are living areas for architect couples, the basement houses their studio.

Designed around a courtyard, the house incorporates hierarchy of zones with formal living spaces in front and private areas at the back. The bedrooms and toilets are in the rear along the north south axis while the drawing, living and kitchen areas are grouped together in the front arranged along a linear east-west axis forming the spine of the house. The courtyard that forms center of the house faces south and is overlooked by living and bedroom areas on the ground and first floors. Adjacent to the courtyard is a steel staircase connecting the upper floors. On the ground and first floors, rooms at front and rear are connected by ‘bridge-like’ spaces that run along the courtyard. Also running in parallel is a two feet deep wall that at places acts as a shading device for large windows or incorporates built-in timber benches overlooking the open courts.

Courtyards have been an inherent design feature of Indian architecture serving as a climate modifier, a social gathering space and are referred to as ‘Brahmasthana’ (sacred center) of a house. Architects have used this idea and organized the functions around the central courtyard on both floors. There are a series of smaller courts/ voids punctuated on all levels bringing in light and ventilation to the spaces and serving as lungs of the house and simultaneously providing views out from every room. The cross-section through the courtyard illustrates this idea with the ‘benching’ form towards the north creating south facing courts on upper levels as well.

The double-height entrance area is connected with a precariously placed staircase that forms the focus of the house. One is awestruck entering this space. This three-storey high stair zone forms a connection between the basement void, ground floor entrance and the first floor. The staircase custom-designed and fabricated out of steel and timber feels as if it is hung in middle of this lofty volume filled with light, facing a full height transparent wall. This glass and steel skin turns horizontal at the top and becomes part of the roof.

Another unique architectural move was to highlight the southwest corner of the house that forms the carport and the main entrance. This corner houses a study cum library on the first floor. The slit window to this room- referred to as the ‘eye’ of the house- faces south. The west wall of the study, overlooking the street, faces the fierce afternoon western sun, which prompted the architects to use motorized louvers that could be adjusted to block off the undesired glare into the room. Moreover, these louvers make an elegant veiled box hovering over the virtually transparent ground floor corner that opens to the front with views to the water body. Also adding to the drama is the ‘V’ shaped steel column that supports this corner reinforcing the impression of weightlessness.

Ground and first floors are predominantly masonry while the second storey is lighter mainly clad in timber. The composition of the architectural form required timber cladding on the second level. The west facing area on this floor is protected with the use of an extended steel and aluminium parasol.

Further, the architects have applied green strategies to make the house sustainable.

The architectural design, with series of inter-connected voids, facilitates natural ventilation generated during summers by using stack effect, thus resulting in cooler spaces. South facing solar collectors have been installed to heat water in winters to be used in toilets and kitchens. This has reduced electric costs significantly as the system does not involve any electric geysers. Also, large window openings allow abundant natural light inside the spaces reducing the use of artificial light sources during the day. Other systems used in construction are eco-friendly as well. Timber and aluminium are some of the recyclable materials used that add towards sustainability. Also, with the idea to operate as a live-work unit from the lower ground floor, the architects have indeed played their role in reducing their carbon footprint. This space being half sunk requires virtually no heating system in winters and very little air conditioning in summers.

Essentially modernist in spirit, the intrinsic idea was to create a house that would be an exemplar of fusion between the traditional and modern values of architecture. As a result, the architectural vocabulary effortlessly integrates the principles of modernism with traditional responses to this particular climate. Further, use of clean lines and white expanses enhance the contemporary aspect of the house. The house is a true visual and architectural delight that appropriately caters to the needs of younger generation looking to break away from conventional house designs without losing the essence of their traditions.