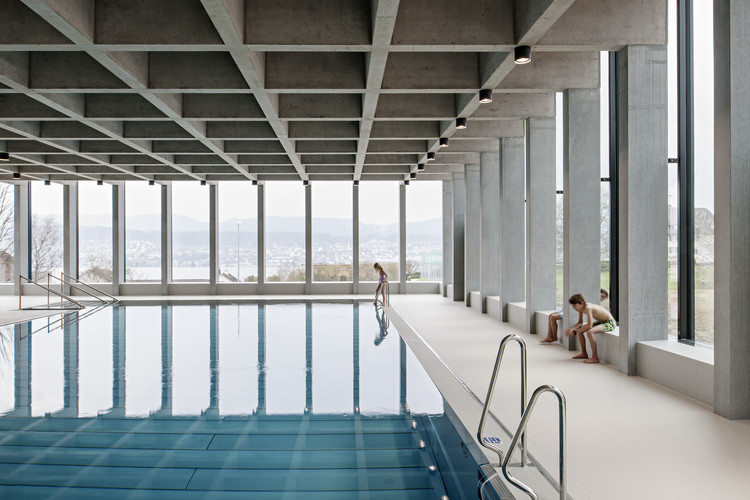 Text description provided by the architects. The disused shelter for rescue forces at the edge of the Erlenbach school campus had disappeared under an overgrown hill and a sports field over the years. From outside, the only identifiable markings were two entries dug into the hillside. It was just waiting on a new lease on life. The lack of swim lessons for the children of the lake community and the site’s proximity to the school made it the perfect location for partial redevelopment into a pool for beginners. A selective tender was created in 2012 to find a suitable general planning team for the building project.

The challenge put forth was to accommodate all areas of the pool in the underground shelter. The team of Pöyry Schweiz AG and illiz architektur was able to win over the client with an alternative approach: Instead of excavating under the former billet to accommodate the enormous volume of the pool, the pool would simply be suspended above the existing cubature of the underground space. This allowed the surface of the water to remain level with the surrounding terrain, thereby offering expansive views over Lake Zurich. Besides the pool’s volume and lift platform, the underground space was also used to house the technology and systems required for the building and pool as well as an entrance hall and adjoining changing rooms. The actual bathing hall was designed as a light-filled pavilion over the new pool and now marks the urban end of the school grounds.

Dark cubes along the terrain’s edge

Today, two seemingly intertwined dark cubes rest on the edge of the ground, only slightly reminiscent of the site’s original layout. The southeast corner of the military billet was exposed and parts of the outer wall removed. A one-storey glass façade now fills the span between the two flanking walls, providing a view into the hitherto hidden interior of the building. Deep dark green wall tiles radiate outward, bringing to mind the moment of immersion into a shady, clear lake. The diffusely luminous atmosphere continues throughout the entrance hall and into the changing rooms. Only as one emerges to the surface and into the bathing hall via a narrow staircase does the wall design become lighter and brighter – with the surface of the water appearing as sunny shores in silvery green and delicate pink.

Interplay of lightness and solidity

Even as the colourful wall tiles unmistakably transform the structure into a swimming pool, the massive and raw character of the old facility remains largely intact. The concrete slab floor of the basement is covered with a protective coating, while cable guides, conduits and pipes remain visible, with corridors and changing rooms illuminated indirectly. Only through the exposed, prone front hall is the massive concrete structure truly revealed, emerging from a surface recessed deeply into the slope.

Structurally, the lately revealed building and the structure placed upon it have been formally united as a new entity. A massive coffered concrete ceiling spans the entire bathing hall and rests on a dense row of slender concrete columns placed along its edges. The ceiling almost appears to float over the delicate tile designs covering the interior walls. Between the columns, the silver-grey floor folds into benches that encircle the pool, while a filigree glass façade wraps around the raw concrete structure like an effervescent bubble. Steel and concrete supports stand in synchronous sequence, yet remain at a significant distance from each other. As the inside begins to glow at dusk, the contrasting interplay of lightness and solidity is particularly clear. The dark envelope of the building seems to dissolve, thereby revealing the plasticity of the superstructure and its exceptional tectonics. 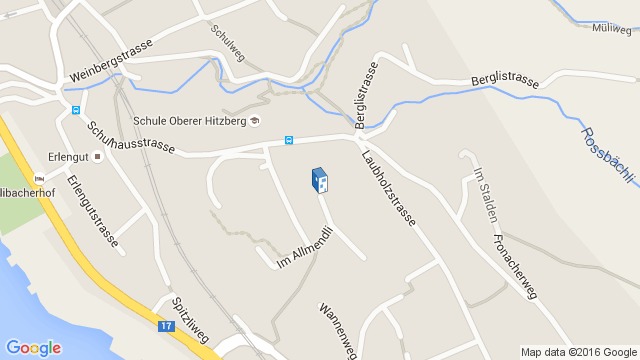 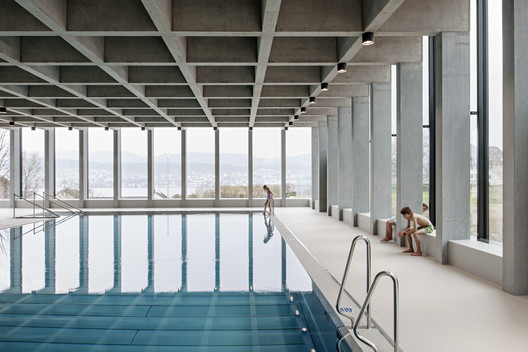