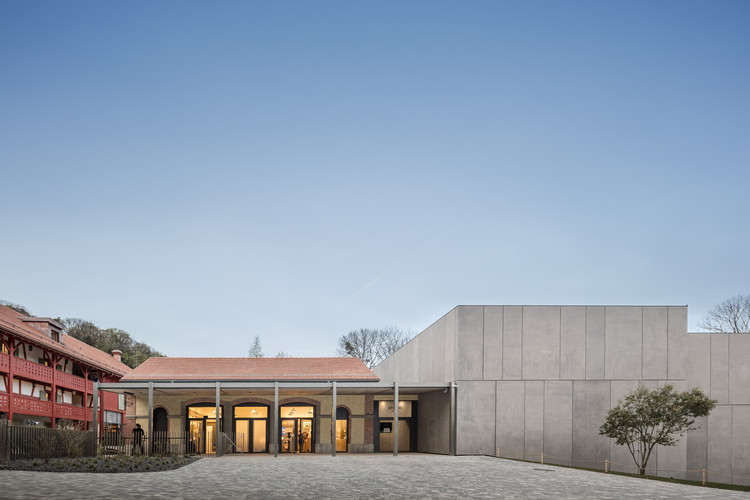 Text description provided by the architects. Last 16th April, Chaplin’s World, a museum dedicated to Charlie Chaplin, was inaugurated after more than 2 years of construction. Conceived by the IttenBrechbühl SA of ce and realised by the general contractor HRS Real Estate SA, the project integrates a new large-scale building that is both sober and modern as well as the restoration and transformation of the Manoir de Ban and its outbuildings in a preserved rural environment.

An exceptional site for an extraordinary museum

Adjoining the Lausanne-Vevey motorway, this 14 hectare plot enjoys an idyllic position above Vevey, overlooking the landscape and Lake Geneva.

The universe in which Charles Chaplin lived during his exile in Switzerland was composed of a mansion (The Manoir de Ban), the outbuildings and agricultural buildings. With the new Musée Chaplin, an additional complex, the Studio, is now being added. It is subtly integrated into its unique environment and revalues the existing elements.

The Studio or The Tramp’s house

Set up as a continuation of the garage, this new half-buried two-storey building houses the cinematographic universe of the artist, actor and director over more than 1350 m2. Five volumes interlock to form a streamlined and sober building. Realised

in pre-cast concrete slabs, the mineral facades play the part of a background in the landscape. The shadows of the surrounding cherry trees are projected onto the facades of this simple volume, as if it were a cinema screen. By its simplicity, the building pays homage to the site and to the existing buildings.

Inside the volume, a multimedia scenography makes it possible for visitors to  nd out about the cinematographic heritage of Chaplin from different perspectives. The entrance is located on an open, bright and airy overhang. It opens out onto a cinema theatre which transposes visitors into the secret universe of Chaplin’s work. The screen then rises to reveal an emblematic street with a Hollywood air which invites visitors to wander through spaces producing the films of Chaplin. At the end of this path on both floors of the building, the visitor comes up from the basement into a light, glass space opening out onto the restaurant.

Registered with the Swiss Inventory of Cultural Property of National Significance, the Manoir de Ban, of neo-classical style, was built in 1840 by the Vevey architect Philippe Franel, author, among other things, of the Château de l’Aile and the hôtel des Trois Couronnes in Vevey.

In collaboration with the Monument and Site service of the Canton of Vaud, it has been completely restored and renovated by the IttenBrechbühl Office architects and HRS Real Estate SA  acting as General Contractor. Many artisans have contributed towards the restoration of the slate roof, the replacement of the molasse door and window frames, the enhancement and preservation of the vaulted cellars and the restoration of the building’s original colours. Environmental and security upgrades were necessary to make the building accessible to the general public. Today, the ground floor and the first floor house the areas devoted to the private life of Chaplin including the reconstruction of the artist’s and his family’s private rooms. The attic has been transformed into one single large reception area.The farm and the garage

In this same spirit of conservation, the facades of the farm and the garage have been entirely renovated and restored, but the interior spaces have been completely remodelled. The old farm accommodates the administration services office in the “housing” part and the restaurant in the “old barn part”. An adjoining terrace makes it possible to accommodate more than 200 people. The ticket desk and shop are situated in the constructed area of the old garage.The facades of these two buildings have been repainted according to the romantic trend at the time they were built. In order to obtain a clean and noble aspect, the materials have been completely reproduced in trompe-l’oeil on a roughcast or paint base. This technique has the advantage of concealing all the defects which the original materials could show.

The maintenance of the park is also continued in the spirit of Chaplin. He liked flowers and planted rare species in the garden. The garden therefore always invites a walk which, because of the splendid view of the mountains, constitutes an unparalleled experience. The transformation of the site into a museum also entailed important access infrastructure work in order to harmoniously integrate the new institution into the local urban fabric: redevelopment of highway access, new pedestrian precinct, cycle path, drop off area and parking for motor bikes, bicycles and coaches, and access to some 230 car parking spaces on the site.

Chronology of the project and a revival

After being banned from staying in the USA in 1952, Chaplin settles in Switzerland with his family. He moves into the Manoir de Ban in Corsier-sur-Vevey, above Lake Geneva. He will spend the rest of his life there until his death on Christmas Day 1977.

In the nineties, after the death of their mother Oona, the children bequeath all the property of the Manoir de Ban to the musée Chaplin Foundation so that a museum will be built in tribute to their father. Following 16 long years of study and work, a building permit was granted in 2009 and finally after 2 years of construction, the museum opened its doors to the public on 17th April, 2016. 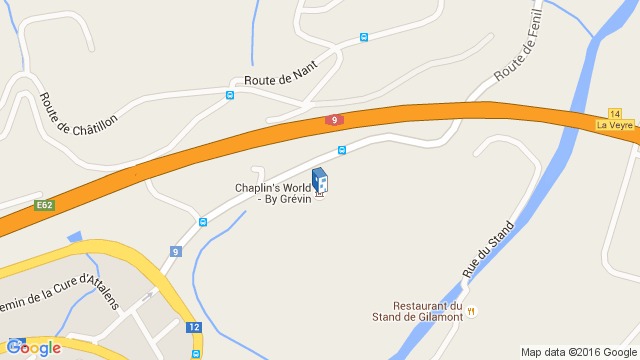 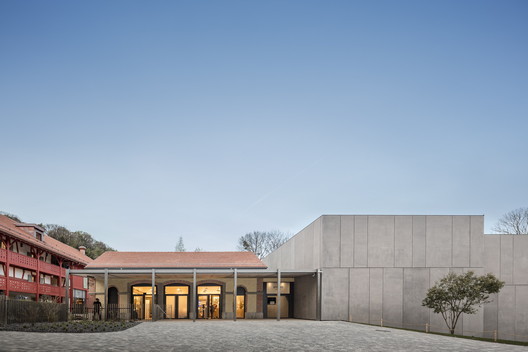