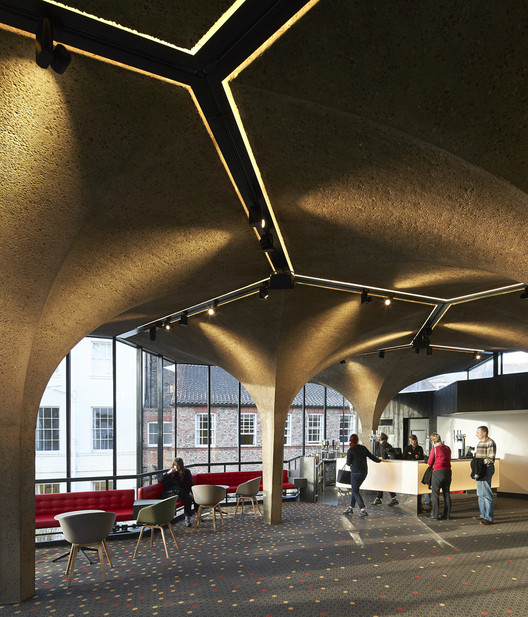 The theatre has occupied the site since 1744 and has since under gone several alterations over the years, including the construction of a new foyer, a vaulted concrete pavilion built alongside the original building, by Patrick Gwynne in 1967. The redevelopment of the Grade II* listed building unlocks the full potential of a complex site that had developed incrementally over 270 years. It has created additional space the theatre urgently needed in order to appeal to and engage a wider community, bring more people into the building and create the opportunity to increase revenue, enabling it to be more financially resilient in the future.

The radical redesign is immediately apparent from the street with the introduction of two new lobbied entrances, one of which allows entry from the south for the first time. The creation of new foyer space below the Dress Circle at the back of the Stalls by opening up where previously there had been broom cupboards, and the glazing in of the Victorian colonnade are the most demonstrable changes to Front of House. They provide a greater freedom of circulation, connecting the Patrick Gwynne extension (House Left) to the Georgian staircase and Keregan Room (House Right) for the first time.

This newly found space provides for an improved welcome, gathering and orientation. It also gives the opportunity to reveal the heritage of the theatre and the site, making compelling connections between the past and present. A new Terrazzo floor incorporating a patterned inlay reveals the geometry of the mediaeval vaults that once crossed where the new foyer is, while the original doorway is now exposed from within the layering of the colonnade wall linings. Housing a welcoming street-facing café clearly visible from the outside in order to draw people in, the Victorian colonnade has been glazed to give an animated face to the street akin to a storefront. The red carpet lining the colonnade floor may be seen as a humorous tongue in cheek reference that also reveals the ethos of the theatre that all visitors are VIPs.

Helping to enhance the visitor and audience experience, the installation of new and increased WCs on both sides of the house on all levels reduce waiting times during peak times in the intervals. New sound lobbies and insulation create spaces on all levels for informal performances including music and poetry. Sound insulation allows the café, restaurant and bars to operate during performances, increasing the opportunities for income generation. Access has been improved with the introduction of assisted and lobbied front doors and a range of counter levels accommodating a variety of users, step-free access from the street to the auditorium, and the installation of a lift to make the Dress Circle and first floor theatre bar accessible for the first time.

Patrick Gwynne’s 1967 extension has been carefully refurbished to de-clutter and reinstate the original design intent by improving floor coverings and furniture, upgrading the lighting and replacing the rooflights to give this listed building back its design coherence. Re-locating the café, bar and box office to the new space created under the Dress Circle has brought to life Gwynne’s original vision for the extension to house a bistro restaurant on the ground floor and a dedicated theatre bar on the first floor.

Upgrades to the main auditorium benefit both the audience and performers. New seating has been installed throughout the Stalls, Dress and Gallery alongside efficient air handling and insulation to enhance comfort as well as minimize energy use. The rake of the Stalls has been increased to enable the audience to connect with the Dress Circle and make the house feel unified. The Gallery has been re-raked to improve sightlines, increase ticket yield and offer greater price options across the house, encouraging access to a more diverse audience on all levels. The venue’s previously raked stage meant many theatre companies put York at the end of their tours due to the limitations of a sloping surface that required scenery to be adapted to the site. Alterations to the stage and orchestra pit have widened the scope of cultural possibilities and improved health and safety by creating level access, a flat stage and a better cross over underneath the stage with increased headroom. The new flat modular stage enables a wider artistic programme including dance and also encourages greater innovation. 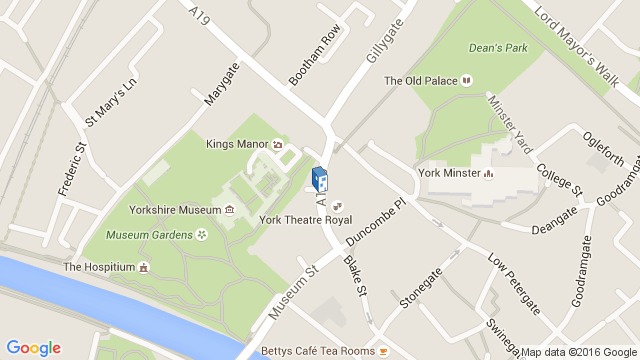