After discovering a vibrant new pigment of blue by accident, chemists at Oregon State University have brought the compound to market in the form of a paint that looks promising to architectural sustainability.

While experimenting with materials to study applications for electronics in 2009, OSU chemist Mas Subramanian and his team mixed black manganese oxide with other chemicals and heated them to 2,000 degrees Fahrenheit. Little did they know, one of their samples would turn into a brilliant blue color.

This pigment, called YInMn Blue, or MasBlue, is formed from a crystal structure that allows its manganese ions to absorb red and green light, and to reflect only blue light. While this structure was previously known, it had never been utilized for commercial purposes, including for pigments.

Used in paints, the pigment is highly versatile, especially as it reflects infrared light at the high rate of about 40 percent, therefore helping to keep buildings cool. Similarly, YInMn Blue products can be used in coatings, plastics, and even roofing materials as a part of sustainable roofing efforts.

Furthermore, none of the ingredients in the pigment are toxic, making it especially innovative to use the compound in paints. “Ever since the early Egyptians developed some of the first blue pigments, the pigment industry has been struggling to address problems with safety, toxicity, and durability,” explains Subramanian.

With its stability and durability even with exposure to water and oil, the pigment is additionally resistant to fading.

In May of 2012, the Subramanian team received a patent from the U.S. Patent Office for the pigment, and has been working with Shepherd Color Co. to develop the commercially-available paint.

The team is additionally expanding their research to include a range of other colors with similar properties.

Learn more about the pigment, here. 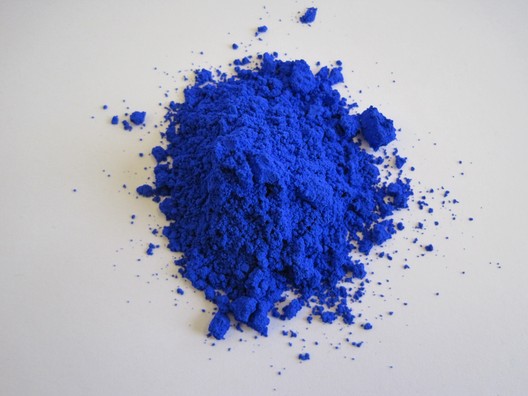