Text description provided by the architects. The project concerns the refurbishment of an apartment in Barceloneta that suffered through a number of different interventions over the years and had lost its beauty and charm. Our team was challenged to apply a new program and recover the apartment's traditional character. The most important aspects included the improvement of both the natural illumination as well as the ventilation of the space.

The original layout of the apartment generated small, dark rooms with bad communication and illumination. The design focused not just on modernizing the space but also on simplifying the congested layout. We decided to eliminate the third bedroom, switch the position of the bathroom and the kitchen to gain floor area on the day zones and restore the interior balcony towards the patio to create cross ventilation in the apartment.

Large parts of the interior walls were demolished to apply the new program and create an open space for the kitchen and the living room. The existing structural elements were reinforced with great care, while new metal elements were added. An elevated wooden floor was constructed for the passage of the mechanical and electrical services. The existing suspended ceiling was dismantled, uncovering the traditional Catalan vaulted ceiling that restored the apartment its full height.  The ceramic tiles were dismantled to restore the flat's original colorfoul tiled floors that were in good enough condition to be retained and refurbished.

The aluminium-frame windows towards the street facade were replaced by wooden-frame ones to resemble the original facade of the building. A fixed horizontal interior window separates the kitchen and the bathroom, allowing for natural illumination to even reach the bathroom. 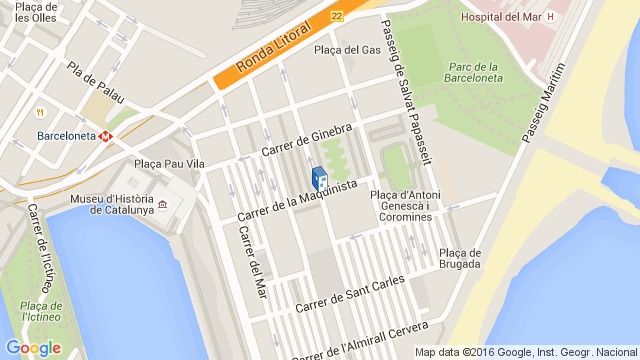 Location to be used only as a reference. It could indicate city/country but not exact address.
Share
Or
Copy
About this office
Marc Mazeres
Office
•••
A53
Office
•••