Save
Architects for Urbanity's 'Urban Womb' is a New Women and Family Complex Facility in Seoul, Korea
Share
Or
Copy

Architects for Urbanity has released its designs for Seoul Urban Womb, a mixed-use women’s and family complex in South Korea. Located in Daebang-dong at the former site of the Seoul Women’s Shelter, the project aims to revitalize the current Seoul Women’s Plaza, a space previously described as “gloomy” and “deathlike.”

The new facility will serve as a connection between the Women’s Plaza and nearby train station, as a mix of public and private space, and is hoped to help “form creative culture, [teach] traditions, and expand the value of gender equality in family and community.” 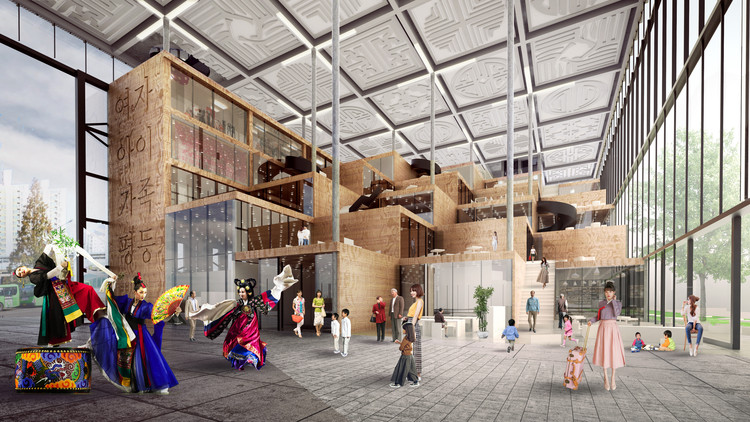 Designed as “an organic womb that intensifies spatially and programmatically” throughout the site, the complex will consist of a large rectangular volume interrupted by a series of voids that define and connect the various programs throughout the facility.

The building will be organized into three programmatic volumes: the pixelated plinth, the vertical tower, and the horizontal roof slab.

The pixelated plinth contains the main functions of the building, such as an auditorium, family space, a youth center, food courts, production labs, and shops. The shape of this volume—an “urban living room”—is derived from its pieces, five stripes increasing in size, each of which contains a distinct program “and is positioned between related activities in order to maximize the efficiency of the building” and the user experience. This way when walking in the direction of one stripe, visitors encounter similar programs, but when walking perpendicularly, they find a cross-programmatic experience.

The tower of the building, located at the western edge, houses the boarding facilities and frames the event space. Each of the five floors above ground will feature twelve rooms and two meeting rooms, while the ground floor space will include a lobby and the Museum of Motherhood.

As an inhabited truss structure, the rooftop slab will house the conference and administration facilities for the building. “The whole floor is designed as a clear array of programmatic zones tied together by a perimetric circulation zone. Along the façade, the floor is programmed with informal and open-plan office areas. In the center of the floor and illuminated by two large courtyards are the conference rooms of various sizes, as well as meeting rooms and the vertical circulation cores.

News via Architects for Urbanity. 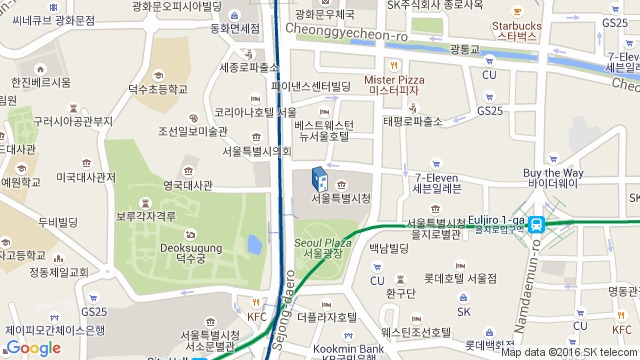 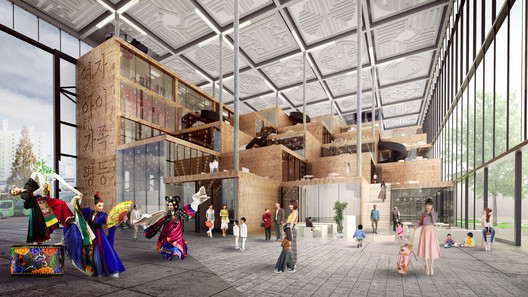