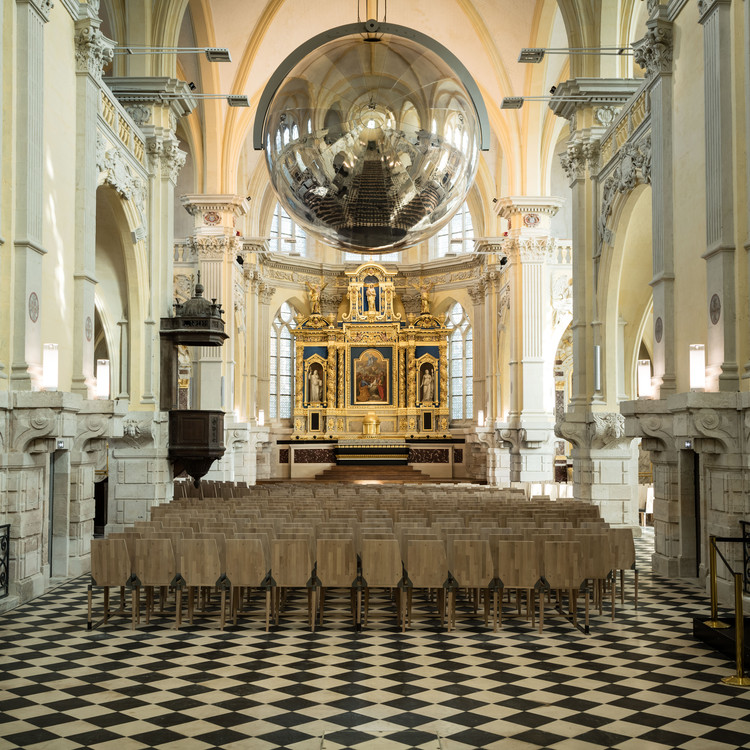 Text description provided by the architects. Respect for the past and innovation go hand in hand in this atypical design whose urban vocation is eminently symbolic.

The Chapelle Corneille, a listed heritage building built in the 17th century in a Baroque style through which the spirit of the Counter Reformation clearly transpires, has been home to high quality musical events for a number of years now, notably during festivals held during the summer and in October, gathering large audiences. Conscious of this success, the Région Normandie wished to reinforce the chapel’s role as a designated concert venue for non-amplified music, offering upgraded facilities to meet modern day requirements in terms both of acoustics and accessibility, and providing professional amenities on a par with the musicians’ talent.

The architects were acutely aware of the need to breathe new life into the chapel while respecting the original building’s integrity, harmoniously integrating 21st century developments within the 17th century architecture.

The difference in height between the building and street level was sufficiently great for facilities catering for the needs of concert-goers and artists alike to be integrated into the basement. This solution also provided easy access for people with reduced mobility, creating a meaningful link between the building as a historical monument and in its modern day vocation.

The new entrance to the venue is sheltered beneath glazing running along the building’s eastern façade, leading the spectator to the reception area and lobby situated beneath the chapel, and from there on to the stairway and lift taking them up to the main auditorium itself. This layout also draws upon the building’s spiritual role, and, just as the believer moves from the ritual of meditation to the awakening of light, so the concert-goer leaves the hustle and bustle of everyday life for the miracle of music.

The access configuration does not complicate the visitor’s reading of the building, in no way interfering with the mainstays of its identity and, in its practicality, eloquently bridging today and yesteryear. The configuration also enabled the architects to endow the building with a façade on an equal footing with its vocation past and present.

A succession of steps trickle down from the main entrance in gentle curves to the seating area, espousing the incline of the plot. Inspired by the urban staging dear to architects of the Baroque period, in which a building was seen uniquely from the standpoint of its surrounding context, the dark grey tones of the stone stairways set off the chapel’s magnificence, its primarily white facades already revealing in this play on light and dark. The people of Rouen are clearly keen to embrace the revisited edifice, and they naturally wend their way across the series of surfaces, both organic and urbane, showcasing a heritage building which for too many years had been abandoned to the stranglehold of the surrounding urban fabric.

A common entrance is situated on Rue Bourg-l’Abbé for use by both the general public and musicians. The latter may go down the imposing exterior stairway to reach the stage-side entrance hall positioned on the ground floor of the chapel and connecting the auditorium with the dressing rooms.

A mural frieze runs above the slope leading up to the ample reception hall, retracing the chapel’s history from its origins to the present day.

The box office and basement foyer are situated in the reception hall, where a bar awaits spectators, while the cloakrooms and toilets are also positioned in the spaces created beneath the chapel.

A lift and staircase in varnished crude steel lead up from the basement foyer to the auditorium, voicing their presence like two contemporary sculptures.

A second foyer on ground floor level has been positioned in the first bay of the nave, and also offers a light refreshment service, in complement to the basement level bar which is for its part connected to the water and electricity supply.

The particular requirements of the musicians have also been taken into account, as the project specifications stipulated. The adjacent building already used to house the dressing rooms has enjoyed total renovation and now offers two vast communal dressing rooms and individual dressing rooms for men and women. A meeting room has also been provided, along with a production office, technical office and logistic zone, all of which have access to a spacious terraced area. A physical bond has been created between this building and the chapel, thereby strengthening the functional and symbolic unity of the whole. 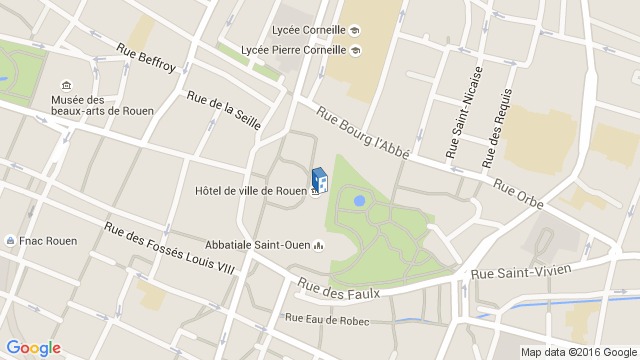