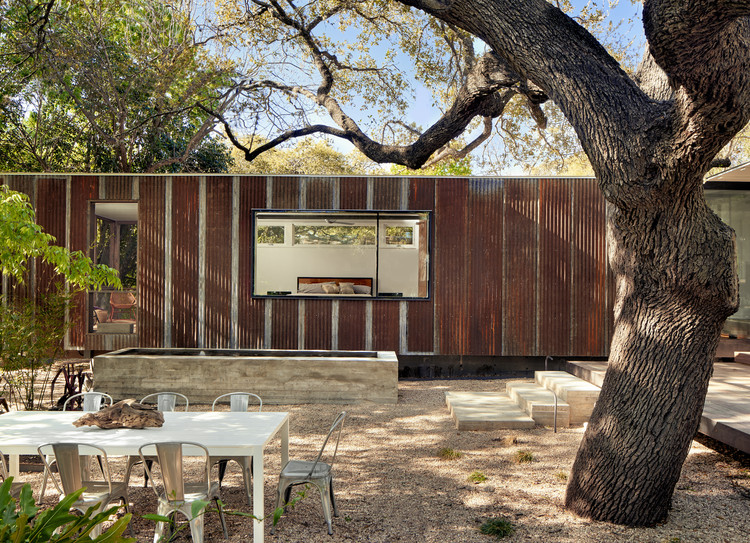 Text description provided by the architects. LeanToo is the addition to an existing cottage situated in vibrant Austin neighborhood. The site had the original home set back from the street and bracketed by two large heritage oak trees, an active city drainage line that cut through the property, and a dry creek at the rear.

The owners of the cottage had previously worked with the architect and had asked for the design to allow for large gatherings, intimate respite, and to be Austin cool. They love collecting paintings and sculpture, and having music play throughout the home. Our design had to able to live and adjust to these collections and occupants. The design itself is aware of the neighboring residential context along with the needs of the owner and site.

It’s subtle low pitched roof sets as a base to the traditional cottage form and we set back the carport to down play the addition’s street presence, acknowledge the neighboring fabric, and add value to the whole.  Renovations were also done to the original cottage, with a new kitchen and guest room both opening to the addition. Exterior terraces were introduced to respond to several things including the tradition of being outside during the beautiful seasons of the Texas Hill Country. The terraces continue up into the house from grade in both the front and rear yards, we like to say there is a single level to this home where we reject stairs in favor of steps. Steps allowed us to maximize the floor space while not expending energy on vertical circulation, and it allowed us casual points of gathering between larger meeting areas. Large glass panes, sliding panel doors, and a quiet screen porch make for the home to open itself up in several dynamic ways without compromising the site’s natural beauty. LeanToo was a project of intense detail that was aware of the intricate stitching needed to both respect the cottage, introduce a modern form, and address the complex site. Several materials were reused, helping to retain the character and charm of the surroundings in the color, use, and texture of material. 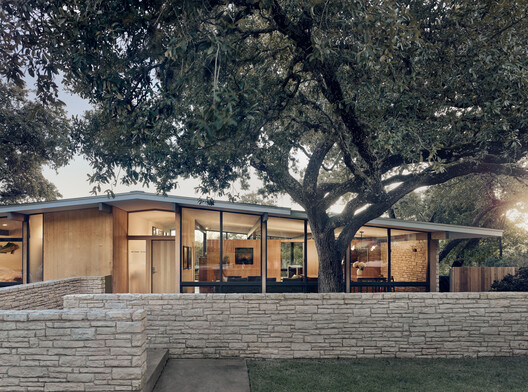