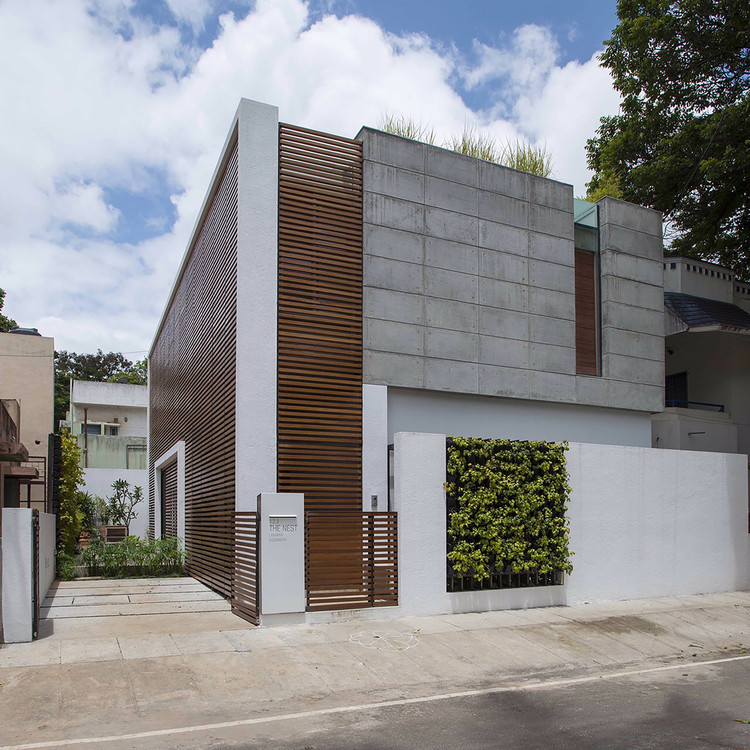 Text description provided by the architects. Located in the neighborhood of Jayanagar, Bangalore the site measured around 2400sq ft where the road is along the northern edge of the site. The clients were a business family consisting of parents and two daughters.

The client’s strong belief in the ancient doctrine of vaastu played a crucial role in the planning and the spatial organizations.Working with the family the program for the 3 bed room house was appropriated to around 3000 sqft. It comprised of three bedrooms along with living , dining, kitchen and the multipurpose room distributed across two levels in a block with a foot print of around 1500 sft..The two story block was organized more towards the southwestern region to create a linear open space along the eastern edge.it comprised of a parking space which could double up as outdoor gathering and also a garden. The set back spaces along the other three sides was also seen as extensions of the internal spaces housing the greens as well as utilitarian spaces.

Open aspect of the design relates to their community way of life where extended family is supported and is included in much of their rituals and daily life. Pooja room is a critical part of this culture and was seen as a sub-volume located between the living and dining. This also helped in integrating the entertainment console as a part of the sculptural ensemble of the Pooja room. The stairs to the upper level is organized along the western edge and is also expressed as a sculptural mass integrating with the furniture of the living space lending a theatrical quality to the space. The stairs lead to a large multipurpose family space at the first level, this space is flanked by the bedrooms of thetwo daughters. The stairs to the terrace is mirrored over the lower stairs creating a column of vertical double height space linking the two levels. Natural Light cutting through linear strip of sky light along the western edge animates this volume. The illuminated surface is visible from the ground suggesting subtly the continuum of the spaces to upper private spaces.the terrace also provides space for gathering and also housing utilities.

The resulting form basically cuboid owing to the geometry maintains a quiet but a stoic presence on the street, reinforcing the notion of a refuge from the busyness of the city. The east facing surface of the volume is expressed as detaching itself from the main body in an attempt to redirect connection towards the eastern stretch of open space rather than the road in front. The fracture or the separation facilitates entry into the house and also allows for the creation of the skylight animating the the multipurpose room and the toilets at the upper level.

The idea of refuge fueled the idea of cast concrete structure with the material adding to tactile quality of space.strategically this concrete armature is punctuated with softer plastered masonry, wood surfaces, windows and openings hidden behind timber screens, lending privacy and also controlling the amount of light. Day light coming through the various apertures of this layered envelope is seen as a crucial factor animating the interior spaces and surfaces. Landscape is seen as a vital part of this layering system. Here green walls help in defining envelopes where it adds to the humane experience intended.