Save
Space to Imagine, Room for Everyone: Inside Singapore's Pavilion at the 2016 Venice Biennale
Presented by:

Responding to the primary theme of 15th International Architecture Exhibition, ‘Reporting from the Front,’ Singapore’s presentation places the small “battles” fought at the home-front. These efforts are contributing to the emergence of an invigorated Singapore.

From within the comfort and the security of the domestic environments and public spaces that have been created over the past five decades, we are now pushing the home-front from within – to create more Space to Imagine, and Room for Everyone. 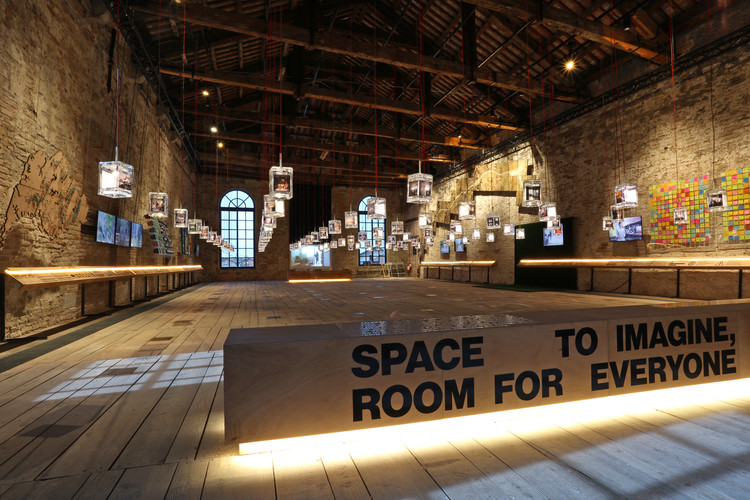 Through actions, guided and spontaneous, initiated by individuals, establishments and groups, we are witnessing active participation of our citizens: stepping out, taking actions, owning and adopting their environments. They have also heightened the role of design advocacy and participation, both real and imagined, at various scales and levels in schemes of future renewals, intensified in-fills of left-over spaces, in the narrow confines of domestic spaces.

In two broad themes (archetypal terrains), at every scale, in the boundary between the private and public realms, actions like participation, contestations, activations, appropriations, transgressions and occupations are enacted. All these happen in the building and urban fabric – on the grounds, in the void decks in the private abodes of our housing estates, and in our public spaces.

In a battery of actions on these terrains, we forge through design a new society built on the gains of the previous more austere generation. In pushing against this front, in turning Singapore inside out, we move beyond from being productive and technocratic, to be creative and egalitarian. Thus, these “battles” at the front is a poignant visual account of our human capacity building, in looking at the past with new eyes and broadly, and in our attempts to humanize the environments of Singapore.

The design of the exhibition uses the grid as a base onto which different meanings and potentials are projected. The grid (a frame with equal intervals in the x & y dimensions) signifies the order and rationality with which Singapore is planned. The grid however, also provides openness and freedom. In the exhibition space, we set up a grid that allows everyone to move freely, to appreciate the diversity of stories that thrive within.

The effect created is an atmosphere to envelope and immerse the viewer. The curatorial team endeavoured to make an emotionally charged experience using the hundreds of interior scenes from everyday life in our public housing estates, the Housing Development Board (HDB). More than experiencing any one of these HDB interiors in the skin, the exhibition would immerse the viewer intimately in the diverse collection of interiors, an intensified domestic experience.

Eighty-one (81) customised image lanterns are suspended at eye level in the central space. On three faces of each lantern, a photograph from the HDB: Homes of Singapore collection will be mounted. On the fourth side, one will look into the lantern2 to see a small model of the HDB block in which the interiors described in the photographs are sited. A bulb in the centre lights the model as well as the photographs from behind. A viewer will freely meander through these scenes of everyday life, glowing gently.

One may notice that in this pavilion staged for an International Architecture Exhibition, it is not showing buildings. Rather it is showing the connections between people and their spaces. The challenge is that while buildings are traditionally documented in drawings, photographs, and models, the stories of these small “battles” that were found on our home-front had no ready-made form.

To embody the spirit of each participant, the curatorial team selected from each an artefact, a visually striking object that bears the marks of their endeavour or tells the stories succinctly. In one example, the Ground-Up Initiative (GUI) displays the mud-bricks that their volunteers are making for the walls of their new campus. For Participate in Design (P!D), an array of the colourful, now universal, Post-It notes that the protagonists gathered from their consultation sessions is presented.

The selection of the artifacts that will carry the story of each participant is an act of design as much as it is an act of curation. This direct on-the-ground approach, like the preparation of fresh sashimi, is premised on choice and cut. No seasoning is required. The design philosophy for the Singapore Pavilion is, similarly, to present the inspiring stories in an honest and transparent manner.