Text description provided by the architects. The Cultural Palace was designed in the year 1930 by the Bucharest architect Victor Smigelschi, and its primary purpose was to host ASTRA Cultural Association’s events.

The first changes to the original design were to building’s main hall and these were made in the early 1960’s in order for it to accommodate a new function as the city’s cinema. Also from the same period the first floor of the building underwent some minor functional changes to accommodate the History and Ethnography Museum of Blaj and the Town’s Library and Blaj’s Wire Broadcasting Centre.

In the winter of 1995 a violent fire burnt down most of the building, severely damaging the roof and the interior space of the main hall. It remained a ruin until 2012, when the municipality initiated a project for the rehabilitation and refunctionalisation of the Palace. The building would be predesignated to incorporate a flexible multipurpose hall, which could be lit both artificially and by daylight, and which could host a wide variety of cultural events such as concerts, galas, theatre plays, conferences, exhibitions etc. The building would also serve as the headquarters for the Alba branch of the Romanian Academy.

Research
The Cultural Palace of Blaj was excluded from the list of the Romania’s Historical Monuments, even though it is located in the Historical Monuments National Protected Area. Sections of the initial architectural project attributed to Victor Smigelschi were found in the National Archive, as well as two pictures in which the building can be seen shortly after its inauguration. Regrettably, no records were found relating to the original interior design of the main hall.

Design Concept
With the benefit of historical research and with technical expertise it was decided that the spatial and functional design concept of the building, which was now a ruin, would follow the initial project. That decision meant that the alterations that were made in order to accommodate the later institutions had to be removed. The new design follows two directions: firstly, to evoke the recent tragic history of the building and secondly, to create a flexible interior and exterior space that can easily be adapted to the needs of the community that it serves. The main hall becomes a multi-purpose space by removing all the seating and through the addition of more daylight through the new roof lights. Other small reversible changes such as, the metal structure of the roof, the brick cladding and the suspended ceiling reminds the visitor of the recent fire. 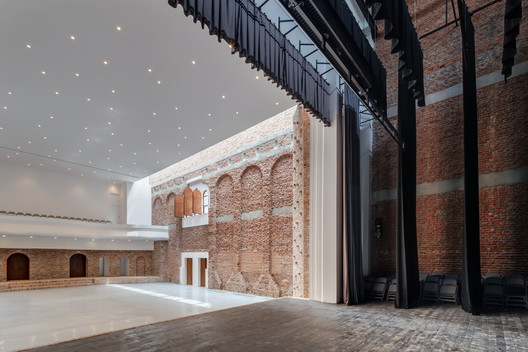