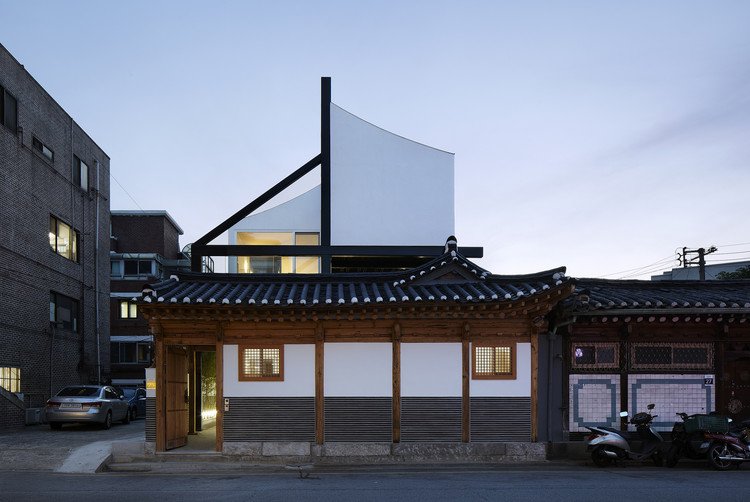 Sinseol-dong is a place that some 'urban hanok' still exist. However, as walking that area, it is hard to catch at once that the building is hanok. Because most of them are too old and repaired for several decades. Even some are too old to use as a dwelling and mostly over maximum FAR.

The site of project was so rigid with district plan and restriction. This place is not allowed to construct new building. In detail, it was only possible to construct 50% area of existed building ;49.5 sqm (Previous- 99.9 sqm). Paradoxically, because of the complicated restriction, this shabby, old hanok could survive so far.

Due to the Hanok's wooden structure, It is hard to extend vertically. It became more weaker when remodeling hanok. That is one of the reasons why hanok is limited in progress as a modern architecture.

As a way to extend hanok vertically, we adapted steel frame structure to make the other volume floating above the hanok. So the hanok could be preserved as much as possible. And the new volume could stand as a independent structure.

All this time, the version of Hanok could be said that 'the single-traditonal one', 'a 2-3 story adapted hanok' or 'a hanok on the other volume'.

'Sinseol-dong hanok' takes another position. It tries to make other floating volume above hanok by using a new steel frame structure. By repairing and reinforcing, the hanok and new volume could exist respectively and also co-exist. We've searched how the hanok could keep its shape and make balance with modern architecture at the same time.

There are many factors to repair and extend existing hanok; structure, restriction, cost etc. Also the factor of restriction and way to resolve will not be same in hanok in buk-chon and hanok in sinseol-dong. It can be said that the restricting factors in sinseol-dong gave clues to make other possibility in this project.

It has 7 steel-columns on the ground -away from the court of ㄷ-shape hanok. It could have been more easy to solve if the column stood in the middle of the roof of hanok, but it would have worse in detail then -like insulation, waterproofing and finishing. To do this, we arranged column avoiding roof of hanok and made cantilever structure using horizontal beams and inclined beams.

For that reason, the columns and beams are avoiding existing hanok and supporting new volume making a sort of tension between old and new. 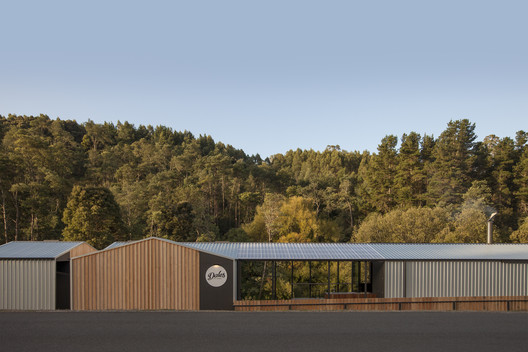 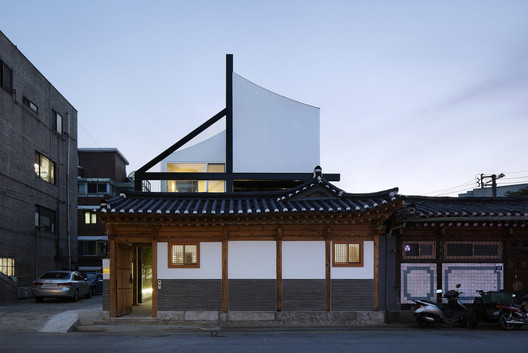