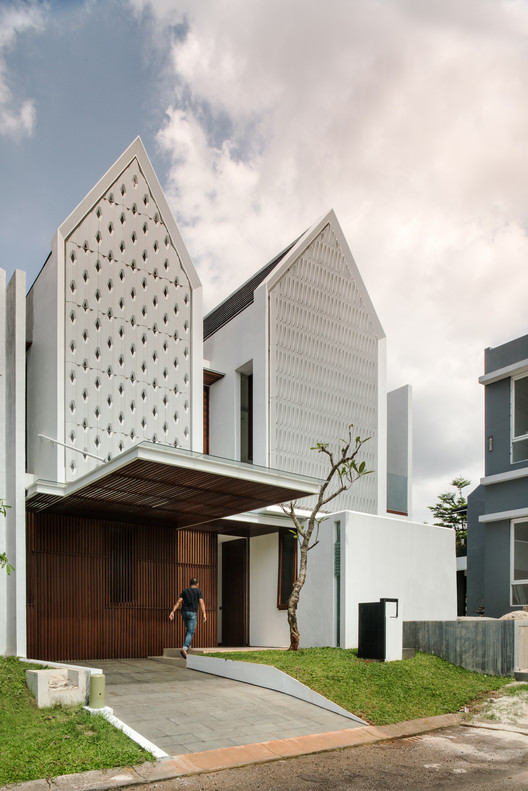 Text description provided by the architects. Every corner in a house owns its respective functions that makes up a braid of atmosphere, Spouse house, presented in a different way.

Located in a residential area of Bintaro, this house looks different from the other houses in the vicinity that have similar facade. This house was built with an area of 200 square meters, which is interesting in this site is due to have two main streets on the front and back side of the site, it will affect the shape and the program of the function in the home.

The presence of two entrances on the front and back of the site results in a potential cross circulation problem in the house, for that there should be a 'breakpoint', in which an architect uses krowakisme philosophy (krowak = hole); such krowakisme is translated with the presence of inner court, void and bridge on the second floor.

Inner court is provided to accommodate the living entities such as fresh air, sunlight and wind can freely enter the house; thus, it enhances the quality of life for residents become better and healthier. Meanwhile, a void is to create the atmosphere between space of each floor more 'fluid' and the Bridge is to create a sense of space is more enjoyed.

The house is divided into two floors. Taking the middle-aged owner into consideration, the master bedroom and the common room are situated on the first floor, while in the second floor there are two bedrooms for children and supporting room. Each room is adjoining the void and / or inner court, so every room gets lighting and natural atmosphere.

The facade of the house is separated into two parts, so that from outside the facade looks like to have two integrating houses. It is also based on the consideration of the facade of the house leading to the west side where being frontally exposed by the sunlight. Therefore, the division of the two masses serves to reduce exposure to direct sunlight on the facade of the house and reduce the impression that the house is too closed. On the left side there is a daughter's room and on the right side there is a boy's room. Because they have a couple of kids, a Spouse House name is given that means a couple. Then the pattern of those two facades is made consistent with the character of both. The pattern is made of a three-meter iron plate and in white color to match the surrounding houses.