A team comprised of Moore Ruble Yudell (MRY), Tongji Architectural Design and Research Institute and SWA Landscape have proposed the winning design for the new College of Architecture and Design at Wenzhou-Kean University in Wenzhou, China. Their design is made up of a series of rectangular volumes, at the core of which lies a large forum, central to both the building and the university as a whole. Prominently sited at the entrance to the campus, the new College presents a grand portico to welcome visitors into the university through the formal entry quad. 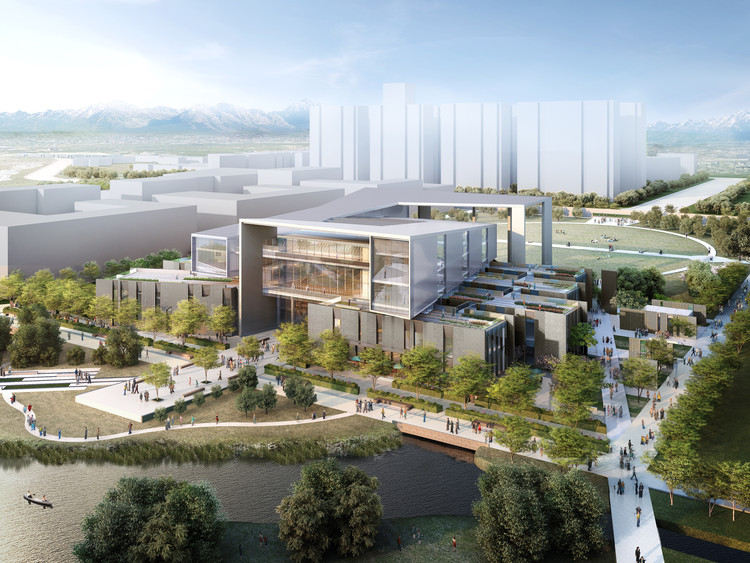 Wenzhou University is a joint venture between Kean University, a public university based in New Jersey, and Wenzhou University in the Zhejiang Province of China. The American and Chinese institutions began the joint venture in 2012, and the winning team reflects their spirit and vision of the university. The Wenzhou campus has been rapidly developing and follows an original masterplan by Michael Graves. The new College forms an integral part of this plan and sits in proximity to the recently announced Student Center and Library, designed by Schmidt Hammer Lassen.

The winning design is divided into two primary programmatic zones stacked atop one another. The ground floor contains the programmed spaces, with four parallel volumetric masses housing classrooms, shops, and labs. The alleys between these volumes enhance community interaction as well as bring in natural light and ventilation. The two-story bars are repeated in approximate size on the upper level, but stacked at angles to the ground floor to capture views of the campus and its central lake. These upper volumes house open­-plan studios for architecture and design frame a central atrium, the Forum.

The lower bars of rusticated stone and concrete, framing the alleys between them, are inspired by traditional Chinese neighborhoods,” says John Ruble, partner of Moore Ruble Yudell. “The two upper studio bars are light­filled volumes. Enclosed by translucent panels and glass curtain wall, they tilt and align to other campus elements, creating a dynamic presence on the campus.

The building is arranged around this central 'Forum,' which provides the predominant means of circulation within the building. Large terraced seating and stairs bridge the lower volumetric masses to the upper levels, with the atrium affording internal views between these. With seating space for 900 people, the new multi-purpose space will play host to campuswide events of all disciplines. “The president of the university envisions the Forum to be the major campus venue for lectures and conferences across all disciplines,” says Christopher Chan, principal of MRY. “This puts the College of Architecture and Design at the center of the university community."

The proposed design incorporates passive design principles, reducing overall energy consumption to align with China's plan to slash energy usage by 2020 by 40 to 45 percent of the 2005 levels. The building is optimally oriented to minimize solar heat gain, and facade shading systems control the natural daylighting. Energy use is reduced through the appropriate use of thermal mass, photovoltaics, natural ventilation, heat pumps and ice thermal energy storage. Roof gardens will capture storm water, which will be directed to the campus system of canals and the central lake.

The College celebrated their first graduating class this year and plans to occupy the new building in 2018. 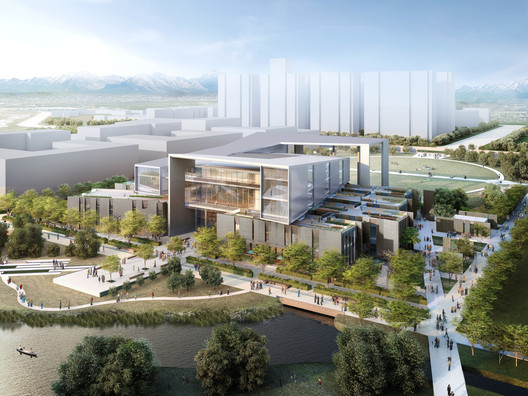